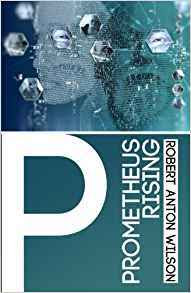 The piece includes an outline of the Eight Circuits theory of consciousness and a recommendation that people try the exercises in the book rather than just reading it: "It is, paradoxically, one of Wilson’s least commercially successful books, but its reputation in occult circles is nearly mythic. Which is to say out of a hundred people who claim this book changed their life, maybe ten read it, and only one or two has gone the extra mile to actually try the exercises. That sounds snide, but Wilson himself lamented that most of the people who came up to him and expressed admiration for the book couldn’t name a specific exercise from it. He soon learned to stop asking questions and just accept the compliments when they came."

Incidentally, when I posted about part one of the series, I predicted that Morningstar would follow up with pieces about Prometheus Rising and Quantum Psychology, so I'm right so far.  Part One is worth reading, although the mistake Supergee spotted still hasn't been fixed — he still puts Playboy magazine's offices in New York, rather than Chicago.
on November 22, 2017

A nice concise description of Prometheus Rising. Regarding his circuits description, while one can always complain that some "crucial" part was left out, the descriptions were well written – concise and easy to follow.

One small quibble I had was where Samuel writes:

"In Cosmic Trigger I, RAW states his theory that the much speculated about Illuminati are merely adepts who use sexual tantra techniques to awaken higher brain functions, including communication with potentially alien races. This indicates his belief that the Illuminati have awakened all eight-circuits and are slowly helping us move past our primitive instincts so we can become an immortal, space-faring race."

Bob was famously whimsical in his writing, but I'm pretty sure he had a slightly lower opinion of the Illuminati. I'm editing a 1983 interview with Bob, and in one place he says,

"The Illuminati really was a very influential organization in its time. I am extremely skeptical that it still exists. But it did play a much larger role in the 18th century than most conventional historians realize. The more you look at it, the more intriguing connections leap out at you."

"In sum, I don’t believe the people who say that the world is controlled by one vile group of conspirators who are running everything, but I believe there are actually a multitude of conspiracies contending in the night."

Samuel ends the article by saying,

"Since RAW made those speculations in 1983 I would say more people have moved from second circuit to third and fourth circuit awareness, as evidenced by the increasing marginalization of the Conservative mind-set in favor of facts, science, and equality."

I'm not sure what country he's living in, but here in the U.S., I would say the opposite may be true for a sadly significant segment of the public who love their reality tunnels centered around the 2nd Circuit.

I thought Morningstar's comments about higher brain functions was a fair statement about some of RAW's suggestions, with the quibble that I don't recall RAW identifying himself seriously as a member of the Illuminati.

But yeah, it's hard to see how anyone who spends time on social media can believe the U.S. is becoming more enlightened about politics. I just saw this headline on Salon: "Trump lovers are attacking LeVar Burton because they think he’s LaVar Ball."

I just went and read Part One of this series, on Cosmic Trigger. I thought it was one of the best short descriptions of the book I've read.