Was 'The Sex Magicians' published as a form of sex magic? 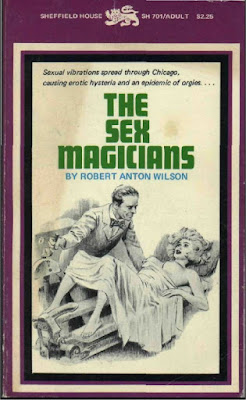 At The Duke de Richileau's Noctural Revelries, a blog devoted to "to the darker and stranger books that I have been reading" by a reader who also likes "drinking tea and listening to heavy metal music," the latest entry is devoted to The Sex Magicians by Robert Anton Wilson.

The post argues that RAW published the book (which I actually haven't read) as a form of sex magic to get Illuminatus! into print. "Now, I don’t know if RAW ever admitted as much; he wrote quite a lot, and I haven’t read all of his books (yet), but I am quite sure that he would at least enjoy my theory. That being said, there are some pretty flagrant clues within the book itself that support my hypothesis. I mean, for the love of god, the book is called The Sex Magicians. Perhaps the most important character in the book, the mischievous Markoff Chaney, is also the most direct link to the Illuminatus! trilogy. Not only that, but the events described in the Sex Magicians end up having been set into action by Markoff committing an act of sex magic."

Tantra cures all and wins the day by the end of the novel, so I don't think the blogger is drilling in a dry hole.

OTOH, one of my favorite riffs is the TV game show based on conspiracy theories.

I'd love to see this come back into print; it's the only RAW book I don't own.

Bob sold each word as many times as he could. I personally doubt Sex Magicians was much more than a relatively easy sale, since so much of it was already sketched in Illuminatus!
As for actually practicing sex magic, Bob's serious study of Crowley is no secret.