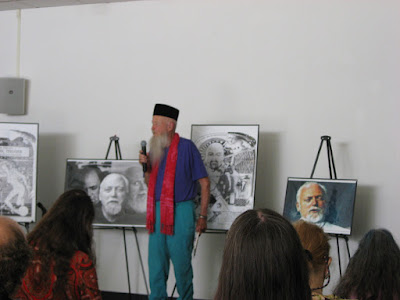 Colorful Doctor Jabir (e.g., "hippie physicist" Nick Herbert)  talking about what Bob "stole" from him. The answer is in Schroedinger's Cat.

[Shortly after Sunday's RAWDay, Branka Tesla sent me some photos and a short report. I missed her initial email, so this is a little late. Sorry about that, Branka! Still a few bugs in the system! Here is her report and photos — The Management.]

Just a short report/update from Santa Cruz (at least from me). Good news: the entire event will be on YouTube thanks to Andrew. Bad news: it will take Andrew about a month to edit and upload it on YouTube. 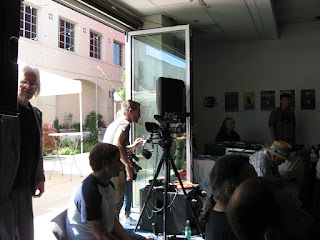 The recording of the event. The fellow sitting in the foreground is Bobby Campbell! The tall guy with the glasses is John Thompson, the original artist for Cosmic Trigger.

I must say the entire event was very substantive. 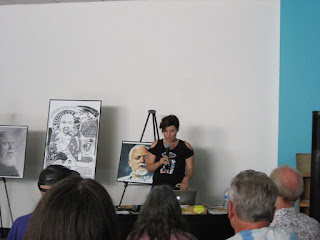 Daisy Campbell
Daisy Campbell opened the event. It was beautiful to watch her talk with so much passion about her weird synchronicities with Illuminatus Trilogy and how she was actually born into the play of Cosmic Trigger. (To be seen on YouTube.) 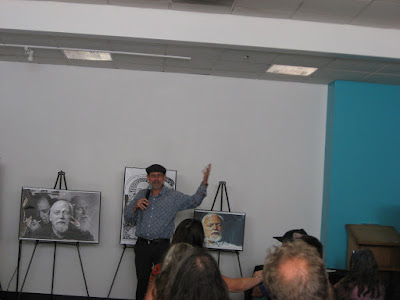 Erik Davis's speech was impressive.  His speech felt comfortably fluid and he emphasized multiple realities. His description of Barrington Hall in Berkeley was very funny. (To be seen on YouTube) 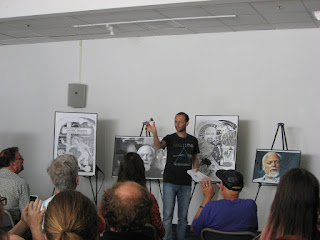 Ferdinando Buscema - magic experience designer  performed a magic called Creating Chaos. Apparently he read Cosmic Trigger so many times that he decided to photocopy the book and reshuffle the pages and read them randomly and memorize the lines. Ferdinando (from Italy) performs all over the world. Here is the link for one of his magic performances where he mentions Wilson, Erik Davis and Nikola Tesla.

Bobby Campbell was so graciously giving his graphic art away. What a creative, intelligent, sweet and generous person Bobby Campbell is. 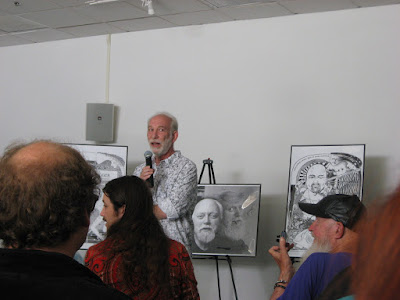