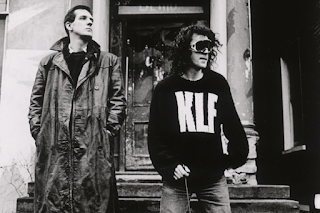 From NPR comes the odd story of an Austrian hit inspired by the KLF, "Bring Me Edelweiss." It's kind of a terrible song (follow the video link from the article), but it sold more than five million copies worldwide. Walter Werzowa, the Austrian musician behind the hit, also wrote the  Intel jingle.

Also from the NPR piece:

... publishing house Faber & Faber announced a forthcoming trilogy of books written by The Justified Ancients of Mu Mu – one of the group's many alter-egos, you may remember — to be "presented as a utopian costume drama, set in the near-future, written in the recent past." NPR Music was delighted to receive an advance copy of the first book in the trilogy, 2023, and only slightly less delighted — truly — to discover that it contained 300 blank pages and a helpful note suggesting that we fill them ourselves.

The Justified Ancients of Mu Mu also announced — today — a three-day event starting Aug. 23, the day that 23-year "moratorium" ends and that 2023 is released, titled "Liverpool: Welcome to the Dark Ages." Each day centers around a single event; a "hearing" on why The K Foundation burned a million pounds, a reading of the first chapter from 2023, the title of which — "WHAT THE FUUK IS GOING ON?" — is at least a double entendre, and "THE RITES OF MuMufication," a ritual.

I guess we'll find out soon what's behind all of the hype and the jokes. I mostly don't get the KLF's music, but the John Higgs  book about the Illuminatus! inspired duo, The KLF: Chaos, Magic and the Band who Burned a Million Pounds, is must reading. Higg's new book, Watling Street: Travels Through Britain and Its Ever-Present Past is out in Britain but not in the U.S. yet.