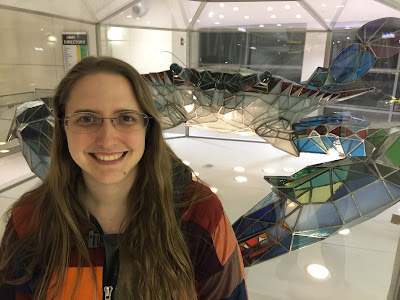 If you pay attention to science fiction, you can't help but notice that many women have been prominent authors in the field lately. I interviewed one important writer, Ada Palmer, for my day job at the newspaper.

I likely would have linked to it here anyway, under the theory that she is a good writer and this is a blog for people who like to read. But when I was preparing the piece for publication and re-reading her answers, I was struck by a comment from her that sounded like Robert Anton Wilson's techno-utopianism when I asked her which transnational-group, or "hive," in her novels she felt closest to herself:

The Utopians. That's easy. I share their drive to work hard for the future, and to see my labors as they do, as a tiny contribution to the greater project moving humanity away from death and toward the stars. I've been delighted to see how many people have reacted similarly to reading about the Utopians as well. Right now our culture has a lot of cynicism and pessimism in its discourse, to the point that it's in effect rhetorically fashionable to be a pessimist, and cynical comments have become a way to look smart and cool, while a lot of people tend to associate idealism and hope with naivete and foolishness. But underneath that, a lot of people do feel sincerely passionate about their work, and about contributing to something greater, though too often people feel nervous about saying so, for fear of being mocked or called naive. I think it's important that we feel as safe expressing hope and sincerity as we do expressing doubt or cynicism, and the Utopians are a tool to do just that. So it's been delightful meeting readers who see mirrors themselves in the Utopians and say, "Yes! That's the kind of hope I feel!"