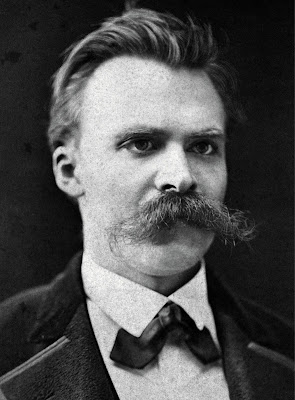 When I re-read "Left and Right: A Non-Euclidian Perspective," I was struck by RAW's comment that that Nietzsche made a "powerful impression" on him and that "I still re-read one or two of his books every year, and get new semantic insights from them."

As I have never read Nietzsche, this raises the question of where to begin.

I pulled out my trusty copy of Eric Wagner's An Insider's Guide to Robert Anton Wilson by Eric Wagner, and sure enough, Eric is on the case, noting that Wilson mentioned Nietzsche in both of his lists of books that everyone needs to read.

When I looked in the Kindle store on Amazon, I found the Mencken translation of Anti-Christ for 99 cents, so I bought it. There were cheap editions of Twilight, too, but I couldn't figure out which translations were good.

I once saw a Gahan Wilson cartoon that showed a man sitting at a bar, with a robot standing next to him. The man with the robot tells another person in the tavern, "He's programmed to take me home when I begin quoting Nietzsche."

Nietzsche seemed the favorite philosopher of the counter-culture in the 60s and 70s - probably what the Wilson cartoon was parodying.

Nietzsche is one of those writers whose complete works I hope to eventually read. I haven't read 'Anti-Christ' yet, but it just moved to the top of the list. "Twilight of the Idols" is a good one. I also really like "The Birth of Tragedy," "Thus Spake Zarathustra," "The Gay Science," "The Genealogy of Morals," and "Ecce Homo." Nietzsche was a fascinating character who always remained cheerful and affirmative toward life (until he lost his mind) despite the constant presence of debilitating illness, hence his most famous quote: "what doesn't kill you makes you stronger." .... just a second, there's a robot here who wants to take me home... lol.

Nietzsche was also a huge influence on Freud, Crowley, Gurdjieff, Picasso, Dali, Joyce and several other contemporary icons. His concept of 'amor fati' - love your fate - strongly resonates with me and seems related to 'do what thou wilt.' For a general overview of his philosophy, I would be remiss not to mention "Nietzsche and Philosophy," by Deleuze which contributed significantly to his revival in the '60s.

Tom, I think reading Nietzsche will help you immensely in understanding Wilson's methods of destabilizing the reader - "guerilla ontology". It seems to me that Plato and Socrates started the process of deconstruction by questioning their readers. Nietzsche seems to intensify the process and almost demands from his readers to think for themselves. (I think Nietzsche enjoyed destabilizing his readers.) And it all led to french deconstruction and Derrida, and to Wilson.

If I may, I'd suggest "Thus Spoke Zarathustra".

I meant to say in my posting (and of course, I forgot) that RAW's recommended reading list, and Eric's annotations to them, are a very valuable component to Eric's book. His book is only $4.99 for Kindle, and with a Kindle app, you can stick it on your phone for easy reference.

All of the Nietzsche works I've read have been translated by Walter Kaufmann. I would recommend "The Portable Nietzsche." It includes "The Antichrist," "Zarathustra,"& many other bits & excerpts of his principle works plus letters & lots of notes from the translator (Kaufmann)... Have fun. He can be quite challenging to understand at times but worth the effort...

RAW read started reading a lot of Nietzsche when struck by depression during his Berkeley days. He said N's words really helped
Then when he was in Ireland he read even more Nietzsche, whose polemic style, along with Swift, greatly influenced his approach to The New Inquisition and Natural Law

Their are certain pieces of Nietzsche's that sound like RAW himself could have written them. My favorite writing of Nietzsche's is his essay: On truth in Lies in a non-moral sense (available for free online: http://nietzsche.holtof.com/Nietzsche_various/on_truth_and_lies.htm ). The essay is about man's relation to truth and even though he doesn't use the term 'reality-tunnel' that's essentially what he's talking about. My personal opinion is that before diving into length books like Zarathustra or the Antichrist, that you start with this short essay. Here are a couple choice quotes:

“It is even a difficult thing for him to admit to himself that the insect or the bird perceives an entirely different world from the one that man does, and that the question of which of these perceptions of the world is the more correct one is quite meaningless.”

“If each of us had a different kind of sense perception—if we could only perceive things now as a bird, now as a worm, now as a plant, or if one of us saw a stimulus as red, another as blue, while a third even heard the same stimulus as a sound—then no one would speak of such a regularity of nature, rather, nature would be grasped only as a creation which is subjective in the highest degree.”

“The "thing in itself" (which is precisely what the pure truth, apart from any of its consequences, would be) is likewise something quite incomprehensible to the creator of language and something not in the least worth striving for. This creator only designates the relations of things to men, and for expressing these relations he lays hold of the boldest metaphors.”

And finally, this is also the essay where one of RAW's favorite Nietzsche quotes comes from: "we are much greater artists than we know.”

Thanks for the kinds words, Tom. I also enjoyed "The Portable Nietzsche". I find it interesting how Nietzsche pops up in popular culture. The line "God is dead" from "Also Sprach Zarathustra" inspired the Christian movies "God Is Not Dead" and "God Is Not Dead 2". (I love the latter title.) Also, that book inspired Richard Stauss's tone poem of the same name which Kubrick used in "2001". The use of that music in that film made such a profound impact that that music keeps showing up in films and advertisements, such as in an Oreo Thins ad last year.

Reading "In Defense of the Damned" again convinces me that I'm correct in assuming that RAW would have been an Edward Snowden supporter. One of the reasons I liked Gary Johnson in the last election was that Johnson promised to pardon Snowden.

Kaufmann's biography of FN is not only a great read but it sheds some background light that for me was necessary to understand FN. I initially found much of FN's work inaccessible until I read the bio.