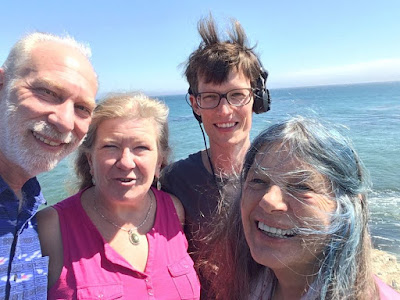 The Robert Anton Wilson Trust has issued its own official announcement on RAW Day in Santa Cruz July 23, following up on the news from our British friends.

The main additional news appears to be Christina Pearson, Robert Anton Wilson's daughter and literary executor, confirmed as an additional speaker, hence the headline for this post. From the official announcement:

Daisy Campbell – the writer and director who recently staged the Cosmic Trigger Play in London, to great critical acclaim. She is a central figure in the UK’s Discordian counterculture revival.

Erik Davis – author and podcaster behind TechGnosis – a seminal writer on the intersection between magic, mysticism and technology.

Richard Rasa – co-publisher of Hilaritas Press and Meta-Programming Director of the RAW Trust, who together with Bob's daughter Christina, is re-releasing mosbunall of Bob's books via Hilaritas Press.

In addition to the talks, DJ, record label boss Greg Wilson (no relation) and creator of the Super Weird Happenings taking the UK by storm, will be playing a cosmically-infused set.