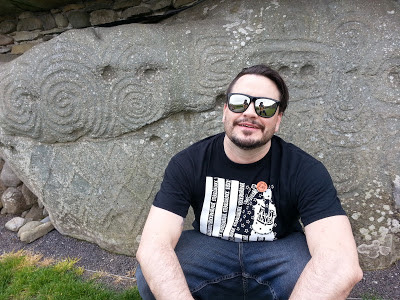 
The new biography of Robert Anton Wilson by Gabriel Kennedy (also known as the musician, writer and activist Propaganda Anonymous) is slated for release in Spring 2018. The book was turned in to the publisher a few weeks ago, so "God willing and the creek don't rise," as they say down South, that should be a pretty firm date.

As we get closer, PropAnon will be doing a lot of promotion for the book, which of course you will hear about here, and Prop also tells me there will be other RAW news soon, so don't touch that dial, which is pretty mixed metaphor for a blog, but old people reading this will remember "listening to the radio" and will understand the expression.

In the meantime, here is my interview with PropAnon after the book was announced (Oz Fritz was a producer for one of his recordings!), and here is PropAnon's more recent Grant Morrison interview.
on July 13, 2017