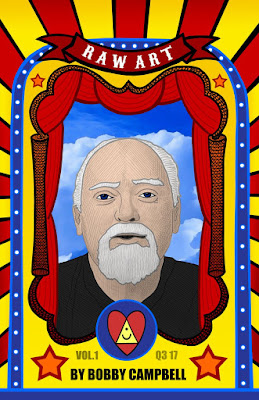 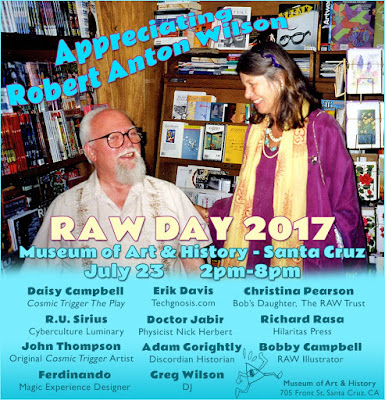 After yesterday's post more news was released on Sunday's RAWDay in Santa Cruz.

Richard Rasa sent out an update on the speakers and guests at the event. The original artist for Cosmic Trigger, John Thompson, will be giving away signed copies of his drawings.

Above, I have Rasa's promotional illustration and the cover of Bobby Campbell's RAW Art. Thursday, Bobby Tweeted, "Very happy to announce I will be attending #RAWday in Santa Cruz this Sunday! and bringing a stack of my brand new comic book: RAW ART :)))"

This event was only announced a few weeks ago and I wish I could attend.

I recently covered, for my newspaper, a town hall meeting held by the local Congresswoman, Marcy Kaptur. It was broadcast on Facebook, and people on Facebook could ask questions. It would be nice if technology could be used to bring Sunday's event to folks who can't attend, or if videos were recorded of some of the talks.
on July 21, 2017

I agree with Tom. Please let those of us who can't attend in on some of the RAW action. I would of made the pilgrimage but I've been expecting a child for the last 9 months and he arrived yesterday! Hopefully there will be more RAW days to come either way.
Coinnigh an lasagne in airde!