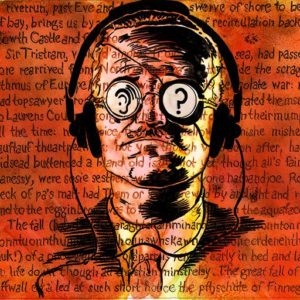 Waywords and Meansigns — the ongoing project to turn James Joyce's opus Finnegans Wake into an audiobook, often with accompanying music — is being released in a third edition soon, project director Derek Pyle has announced.

So far, there have been two editions. The first edition covered the entire book. The second edition was supposed to cover the entire book, except that Mike Watt never finished his chapter. (Supposedly, it will finally be out soon.) Both editions are available free for downloading or listening at the website.

The first two editions covered big sections by each contributor and attempted to cover the entire book. The third edition, which will be the last big release, will consist of shorter bits and more contributors.  The first batch of contributors for the third edition has now been announced, with more announcements to follow.

The names of some of the previous contributors will likely be familiar to at least some readers of this blog: See my interview with Steve "Fly" Pratt and Peter Quadrino. See also my interview with record producer David Kahne (Paul McCartney, Sublime, the Bangles, Bruce Springsteen, etc.), who also was a contributor.
on January 27, 2017