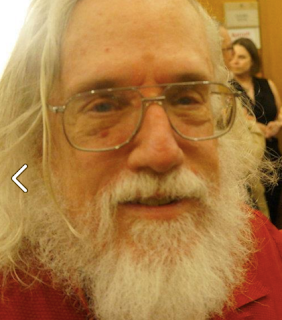 Arthur Hlavaty, popular blogger, also continues to put out fanzines, although now you can get them by email and online, and if you are old school you can still get them in mail. I liked a lot of bits in his new fanzine, Nice Distinctions 30:  The piece on writer Richard Russell, the article on "Star Trek" books (Arthur read them before he had seen the TV series), the bit about non-binary thinking, but for obvious reasons, I'm going to reprint what he wrote after this blog finished the group reading of Cosmic Trigger. -- The Management]


*At the end of a group reread*
At this point, I couldn’t tell you how much _Cosmic Trigger_ specifically expanded my mind, as opposed to the rest of the Robert Anton Wilson oeuvre. Even before _Illuminatus!_ I was predisposed to think that we all live in our own reality tunnels (with strong restrictions from that which does not go away when we stop believing in it). RAW gave me a structure for it.
My reality tunnel is one in which physical science works: The Earth goes around the Sun; vaccines prevent disease and don’t cause autism; toads don’t fall out of the sky. On the other hand, “scientific” studies of people are at best limited and conflicting. That was a disappointment because I had to give up on the hope for something like Asimov’s psychohistory, where the animalistic second-circuit activity of politics could be overcome by third-circuit people figuring things out.
I leave what will probably be my final reading of Cosmic Trigger with a similar sadness: We didn’t get the SMI2LE stuff; the Quantum metaphor is outdated; I wouldn’t have had the courage and discipline to follow Aleister Crowley even if I’d trusted him.
But then there’s the Final Secret. When Wilson’s beloved daughter is brutally murdered by a violent loser to whom we owe the courtesy and respect that is every human being’s due but not much more, he refuses to seek vengeance, and I will always love and honor him for that.