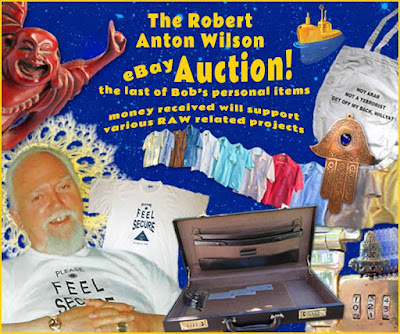 As promised earlier, Robert Anton Wilson's daughter Christina Pearson has launched an auction on Ebay of personal items that RAW once owned.

As of Sunday morning, eight items were being offered for sale: a "last blanket," his briefcase, a WAMM (Wo/Men's Alliance for Medical Marijuana) baseball cap, and five t-shirts. More items will be added soon.

I always enjoy Christina's letters when the estate makes its announcements; you can read her announcement about the sale.  Excerpt:

Every memento listed comes from my dad’s home, and was present in his home when he died. Where I have a picture, I have shared it, so you can see for yourself, whether it is Bob in a teeshirt, or a picture of a bookshelf of his. Many items I do not have photos of, but they were his, nonetheless, and I will be including a card personally signed by me attesting to the validity of his personal ownership with every single item purchased. I am also including a few items that belonged to my mom, Arlen, who truly was the great love of my dad’s life. Guys, don’t you want to see Arlen’s necklace on the neck of your beloved?

Whoa, very exciting! My favorite item, one that I'd normally be all over, is that WAMM hat. But I have a giant alien noggin and it looks like it's for normal human heads.