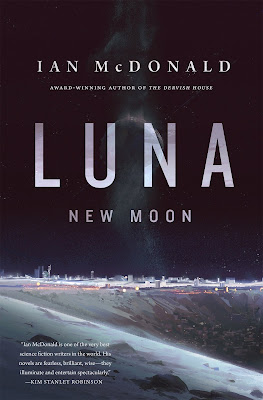 Following up on yesterday's post, here are some of the books I read last year that I thought were particularly good.

Among the works of fiction, I was especially impressed by Luna: New Moon by Ian McDonald, a vivid, fast-moving science fiction set on the Moon that's been described as an SF version of "Dallas," the old TV show. (The book came out in late 2015 but I didn't get to it until last year.) I also was wowed by The Core of the Sun by Johanna Sinisalo, a Finnish science fiction writer (an oddball dystopia in which not only alcohol and psychotropic drugs, but also hot peppers, are banned). I liked the book so much I interviewed the author for my newspaper.

And I also very much liked Swing Set by Janice Weber, who is both a noted author and a noted classical piano player. When I interviewed her in 2015, she told me she was surprised when her literary agent suggested she do a novel about swinging couples. But in fact it plays to her strengths:
She is good in writing about sex and the novel's situations provide plenty of opportunities to Weber's dark, sardonic sense of humor.

Finally, Travel Writing by Peter Ferry is a literary thriller with a protagonist who, like the author, is named "Peter Ferry" and who writes travel pieces and is a high school English teacher. Probably though, the real Peter Ferry has never become involved in investigating a mysterious death. I guess you never know! A wonderful work of fiction, available as an audiobook as well as in other formats. The Yearbook by Carol Masciola is a YA novel about a time traveling teen. I don't read much YA fiction, but this one was exceptional and would make a good movie.

All of these books are not the same old stuff, and they are works of fiction I can't get out of my head.

As for nonfiction, I can recommend The Sun, the Moon & the Rolling Stones, Rich Cohen (exceptional work of biography AND criticism), Rebels on the Air: An Alternative History of Radio in America, Jesse Walker (about nonprofit radio stations,  "illegal" stations, etc., very absorbing), and Exit Right, Daniel Oppenheimer, is a very interesting book about transitions in "reality tunnels" by former leftists who became conservatives.

Three books deserve mention because they might interest readers of this blog: Timothy Leary's Trip Through Time, R.U. Sirius, is a biography of Timothy Leary that emphasizes his ideas, strongly recommended. Confessions of a Raving, Unconfined Nut, Paul Krassner is the very funny memoir of an editor and publisher who played a key role in Robert Anton Wilson's career. And of course I re-read Cosmic Trigger while many others of  you also did.

Those weren't the only good books I read in 2016. I continue to love Gene Wolfe and Richard Blake and Iain M. Banks, for example, and I read fine books by each of them last year. I'll continue to explore some of my favorite authors this year.

This is apparently unfashionable, but as you can see, I actually waited until the year concluded to write my "best books" piece so that I didn't unfairly leave anyone out.

The Sun, the Moon & the Rolling Stones sounds interesting, thanks Tom, and Happy New Year!