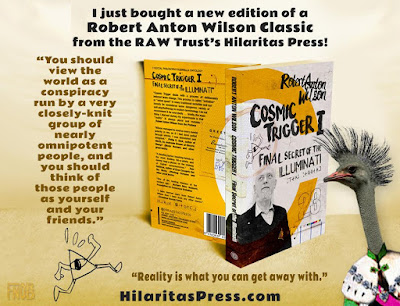 The folks at Hilaritas Press, official imprint of the Robert Anton Wilson Estate, reports that after publishing new editions of Cosmic Trigger 1, Prometheus Rising and Quantum Psychology, the publishing house will concentrate this year with its new editions of Email to the Universe and Coincidance: A Head Test. A list at the official website gives the planned schedule for republication of RAW's various works.

Richard Rasa has also published the above graphic, which he is asking RAW Estate supporters to share.
on January 03, 2017

I'll gladly post this. I've been trying to convince some of the other members of my OTO group that they should repurchase the titles now available from Hilaritas.