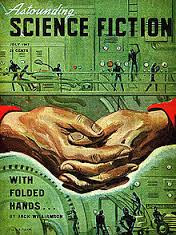 [As I've mentioned before, the Prometheus Hall of Fame Award was the only literary award that Illuminatus! ever got. Thought I'd share the announcement for the latest finalists for the award. (I'm very active in the group that gives the award, the Libertarian Futurist Society.) Here is the official press release. -- The Management.]


The Libertarian Futurist Society has chosen six finalists for the 2017 Prometheus Hall of Fame Award, given in recognition of a classic work of science fiction or fantasy with libertarian themes. This year’s finalists are

"As Easy as A.B.C.," by Rudyard Kipling (first published 1912 in London Magazine), the second of his "airship utopia" stories, portrays a crisis in a twenty-first century society where an unpopular minority calls for the revival of democracy, and a largely hands-off world government is forced to step in and protect them.

"Conquest by Default," by Vernor Vinge (first published 1968 in Analog) is his first exploration of the idea of anarchism, in which a stateless alien society visits an Earth recovering from nuclear war. The story combines a novel approach to the problem of avoiding the decay of anarchy into government with an evocation of the tragic impact of cultural change.

"Coventry," by Robert A. Heinlein (first published 1940 in Astounding Science Fiction) envisions the Covenant, a social compact under which breaking the law, as such, cannot be punished unless actual harm to someone has been demonstrated. The story contrasts that society with a lawless "anarchy" into which those who break the covenant are sent.

"Harrison Bergeron," by Kurt Vonnegut (first published 1971 in The Magazine of Fantasy and Science Fiction), satirizes the idea of radical egalitarianism with a portrayal of a society where all talented people are compulsorily brought down to average --- until one gifted youth rebels against the system.
"Starfog," by Poul Anderson (first published 1967 in Analog) envisions a widespread interstellar society millennia after the fall of a Galactic Empire, unified by the Commonality, a mutual aid organization. The story explores methods of carrying out large-scale projects through voluntary cooperation and market incentives under conditions where central control is unworkable.

"With Folded Hands ..." by Jack Williamson (first published 1947 in Astounding Science Fiction), uses science fiction to satirize the modern "nanny state" and explore an ethical theme: the peril of unrestricted authority, even (or especially) when it is used totally altruistically to take care of those subjected to it.

In addition to the six finalists, the Hall of Fame Committee considered eight other works: "The End of the Line," by James H. Schmitz; "The Exit Door Leads In," by Philip K. Dick; The Handmaid's Tale, by Margaret Atwood; The Island Worlds, by Eric Kotani and John Maddox Roberts; Lord of the Flies, by William Golding; Manna, by Lee Correy; "The Ones Who Walk Away from Omelas," by Ursula Le Guin; and A Time of Changes, by Robert Silverberg.

The final vote by LFS members will take place in mid-2017. The Prometheus Hall of Fame award will be presented at a major science fiction convention.
The Prometheus Awards, one of the oldest fan-based awards in SF, have recognized outstanding works of science fiction and fantasy that dramatize the perennial conflict between liberty and power, expose the abuses and excesses of coercive government, critique or satirize authoritarian ideas, or champion individual rights and freedoms as the mutually respectful foundation for civilization, cooperation, peace, prosperity, progress and justice.

Nominees, which must have been published or broadcast at least five years ago, may be in any narrative or dramatic form, including prose fiction, stage plays, film, television, other video, graphic novels, song lyrics, or epic or narrative verse; they must explore themes relevant to libertarianism and must be science fiction, fantasy, or related genres.

Nominations for the 2018 Hall of Fame Award can be submitted at any time to committee chair William H. Stoddard. While only LFS members are eligible to nominate, any fan, author or publisher may suggest works for consideration.