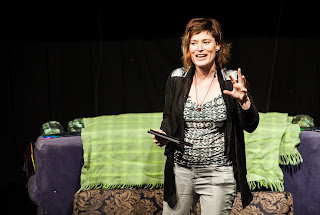 So yes, I have publicly announced on at least 23 occasions that we would be making a pilgrimage to Santa Cruz, where Robert Anton Wilson lived and died, this year, the 10 year anniversary of his death.

This kind of public declaration worked a treat for pulling the Cosmic Trigger in Liverpool on November 23rd 2014, but that's the thing with Cosmic Triggers - they have a tendency to go off in your hand. And I think, bathed in the glory of our last adventure, I got a little trigger happy.

We're not - we now realise - at the Triggering phase when it comes to Santa Cruz. We are still very much in The Finding The Others phase.

So instead I'll come to the US this summer to stir up enthusiasm for a future happening. Tell me Stateside Dwellers; where shall I enthuse, who shall I meet, how shall we scheme? I'm thinking 13-23rd July to coincide with Robert Anton Wilson Day and the start of the Dog Days. But I'll come whenever you call.

I'm truly sorry to disappoint anyone who was all set for the Santa Cruz pilgrimage performance - but let's meet up when I'm there, and before you know it we'll be happily pulling Cosmic Triggers together.

THE LONDON RUN - MAY 2017 - IS A DEFINITE GO-ER!
WATCH THIS SPACE FOR FURTHER INFORMATION VERY SOON.
OR, AS EVER, CONSULT YOUR PINEAL GLAND.