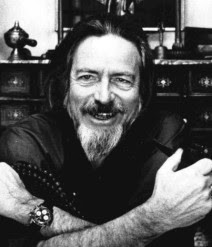 Michael Johnson has a new piece up about Alan Watts. The whole thing of course is quite interesting, but given the focus on this blog, I wanted to call attention to Michael's rather pithy summary of how Watts influenced Robert Anton Wilson:

Watts became a sort of mentor to Wilson, telling him there were some very interesting Harvard professors investigating psychedelic drugs in the context of religious experience. (RAW and Leary became friends and intellectual collaborators from the mid-1960s to Leary's death in 1996.) At another meeting, Watts told RAW he'd just read a fantastic book by Israel Regardie, about Aleister Crowley. RAW went on to become one of the world's most erudite explainers of Crowley, and indeed an Adept himself. At another time, Watts said that the biggest error in history books is the idea that the Roman Empire "fell." It never ended. This became a riff repeated in RAW's and Philip K. Dick's books.

Michael talks about how RAW influenced Watts, too. More here.

The definition of Zen I remember most from slight reading of Alan Watts: "Eat when you're hungry, sleep when your tired."

I heard anecdotally that Watts would sometimes bait people by telling stories with accurate facts, but presented in a way that would suggest a shocking, but false, conclusion. He could tell how much they swallowed the bait by the strength of the reaction it provoked in them. This seems interesting, if true, as a kind of guerilla ontology. Crowley apparently did the same with his students. Maybe Watts picked it up from him?

I would be interested in hearing one of those stories, Oz.

The one that springs to mind is Crowley saying in Magick in Theory and Practice that for the past x years he had sacrificed x number (in the hundreds)of healthy human babies for his work. I don't recall the exact numbers.

Tom: I just now saw this. Thanks! I noticed it because of the Supergee post from "today" where he discusses Watts.

I'm probably one of the few people who takes two or three days between looking at my blog and others' too.