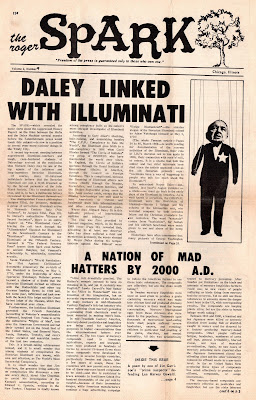 Illuminati Project: Memo #5 and Memo #7 from "Pat" to "J.M." (i.e. Joe Malik) in the Illuminatus trilogy has two particularly unusual citations: An article on "The Conspiracy" from Teenset magazine, and an article from the RogerSPARK, a small left wing magazine in Chicago.

Adam Gorightly has a new posting up which reveals that both of the cited pieces were written by Robert Anton Wilson and Robert Shea, "so in essence they were quoting themselves in Illuminatus!"

Adam even has a PDF so you can download the entire issue of RogerSPARK.

If Illuminatus! ever enters the literary canon, future literary critics will have to acknowledge that Adam did much of the work of illuminating the novel's sources.

Wow, thanks to Adam! I actually tried to find old copies of the Teenset article before since I was fascinated to find out if Ewige Blumenkraft had any historical credence. The truth is much funnier.

I really look forward to reading both of these!