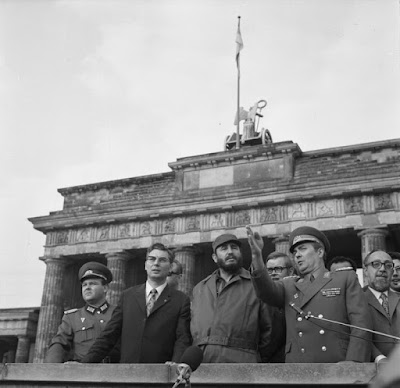 Fidel Castro, hanging out with the East German Politburo.

Fidel Castro is dead, and as usual, I feel like the odd man out. On the one hand, I am totally opposed to  invasions, assassination attempts and even trade embargoes. On the other hand, I find it hard to summon much enthusiasm for praising Communist dictators. Judging from my Twitter feed, I've failed in my duty to choose sides.

By coincidence, I've begun reading Paul Krassner's Confessions of a Raving, Unconfined Nut, his memoirs, and Sunday I came across a passage about his trip to Cuba and his encounter with the Maximum Leader.

Krassner's mentor in magazine publishing, Lyle Stuart, was treasurer of the Fair Play for Cuba Committee, and in December 1960 Krassner was invited to take a trip to  Cuba. He met Fidel at a reception, gave him a copy of Krassner's magazine, "The Realist," and asked for an interview. Castro told him to set it up with his secretary.

Krassner never got his interview. He writes, "In retrospect, I would like to have asked him, 'Do you believe in term limits?' "

Regarding Krassner's wonderful _Confessions_, I was thinking the other day that the chapter "One Flew Into The Cuckoo's Nest" is Krassner at his best.

That chapter alone seems like another Case Study in what happened when they entered Chapel Perilous.

I read "Confessions" during the Summer in 2015 and really enjoyed it, especially Krassner's wonderful such as dancing with Ed Sanders when they weren't arraigned after the Chicago protests, getting sick off of alcoholic ice cream at Ken Kesey's house. While I'm not really much of a Grateful Dead fan his account of their trip to Egypt was pretty interesting too.

Another book which is kinda in the same category would be Ed Sanders' own, more recent, "Fug You" which I really enjoyed...maybe more than Krassner's own memoir.

I also like his Pot/LSD Stories for the Soul anthologies (b/c I'm immature) and his recent collaboration, Psychedelic Sex. I need to get the best of The Realist.

Looking forward to reading more! I've been checking out a biography of Pamela Travers, one of James Branch Cabell's romances, and I just received Donna Kossy's "Kooks" in the mail so I'll be diving into that soon.

While I can't recollect RAW ever referencing Cabell I think he would have been a favorite of his if he had ever picked up "Jurgen." Crowley really enjoyed Cabell's writing and sent him letter promulgating the Law of Thelema and a copy of Liber AL. He (accurately) saw that Cabell had depicted a world of romantic disillusionment and toil that was almost emphatically Buddhist (Cabell was a disinterested Episcopalian...I believe) and wished to convert him to the joyous news of the terrible new Aeon.

The Kooks book is associated with the Church of Sub Genius, which I'm not overly familiar with, and it also seems like something RAW would have enjoyed immensely.

I got a copy of Kooks as soon as it came out, and return to it often. I consider it an important work in the sociology of knowledge.

I've never read Cabell, but don't his fat novels have kinky sex in them? I'm asking for a friend.

Kossy has another book on extremely weird ideas about human origins that I might put on my xmas wish list.

Hey Rarebit Fiend: thanks for mentioning Fug You in light of Krassner's Confessions. Aye, 'tis an apt comparison.

I haven't really been able to dive into Kooks yet but ever since a friend introduced me to the book a couple years ago in a dingy motel room I've been intrigued. It always seems political philosophers get caught up in the Absolute Urgency and Total Correctness they eventually run out of time for other people. I do think Kooks looks like an important work and from what I've read the deletion of the Francis E. Dec article on wikipedia is a good example of that site's faults and biases.

I guess aside from "romance" my go to term for Cabell's Biography of Manuel books would be "sex farces." There's loaded language throughout the dialogue and descriptions but it is very rococo and erudite. I mean, they all revolve around the relationship between women and men so sex is heavily implied- though when it is carried out the main, inevitably male, character is usually more focused on his offended pride, theological discussions, or some nonsensical goal that he talks over the action. One of his most explicit scenes is from Jurgen, the one the obscenity trial was based around, and is merely a humorous reworking of Crowley's Gnostic Mass. So I guess you could almost say he writes about sex in an alchemical style. I love him.

Fug You, like Patti Smith's M Train which I also read this year, had the striking effect of making me write poetry. Something about poet's writing nonfiction prose I guess. Have you read Tales of Beatnik Glory? Is it really good?

Cabell--or, at least Jurgen--made a brief comeback during the post-Tolkein fantasy craze during the 1970s. I think Lin Carter had it in the series of fantasy novels he edited for Ballantine Books.

One author who was definitely influenced by Cabell was Robert Heinlein.

Robert Heinlein soaked up Thelemic oriented ideas really well. I only got around to actually reading Stranger in a Strange Land this past year and realized that the theory Jack Parsons influenced the theology of Valentine Michael Smith was more or less indisputable fact to those who were familiar with Parsons life and writings.