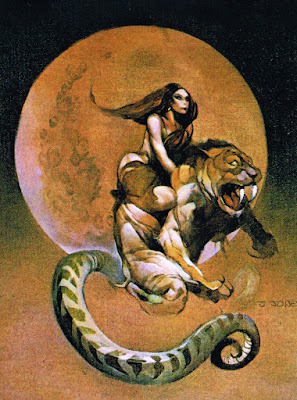 Jeff Jones cover for Darker Than You Think

I have been reading a lot of classic SF lately (as part of my duties with the Libertarian Futurist Society) and I can report that Jack Williamson's novella, "With Folded Hands," holds up really well. I haven't yet read the novel-length version, The Humanoids.

But the work I wanted to mention today is perhaps Williamson's best-remembered work, Darker Than You Think, a werewolf novel. Have any of y'all read it? I finally read my copy after getting it autographed by Williamson at the 1998 worldcon. (Williamson, born in 1908 in "Arizona territory," spanned a long period of science fiction with his work. As a teenager, Isaac Asimov was a fan. When I was a teenager, I read some of his latest stories in the Ted White-edited "Amazing." Williamson won a Hugo for best novella in 2001).

Darker ThanYou Think is a really good fantasy novel. It tells the story of a young man's attraction to a young red haired woman who turns out to be a rather wild girl.  When I finished "With Folded Hands" the other day, I looked up entries about Williamson at the Science Fiction Encylopedia and on Wikipedia. The Wikipedia piece quotes this from Strange Angel: The Otherworldly Life of Rocket Scientist Jack Parsons by George Pendle:

"Parsons had a particular interest in one of Williamson's stories that had recently appeared in the fantasy magazine Unknown.
...
"The story's description of a scarlet-haired woman riding a great beast recalled Crowley's own personal mythology, and the tale of Will Barbee seems to have captured Parsons' imagination because it resonated with his own awakening fervor for the OTO."

I've had Darker Than You Think on my bookshelf since I first started studying the occult/magic/Parsons and finally read it this past summer. It took me one sitting so I was pretty riveted by it, the scene towards the end where he turns into a pterodactyl after his rather visceral death was amazingly entertaining to read. Perhaps the Whore of Babalon is a more ubiquitous character in art than Parsons would have like to believe but the scene where he is ridden in the form of a saber-tooth tiger beast by the witch is visually striking. Erotic and atmospheric, the novel reminded me of the Val Lewton Cat People films.

So I've read Stranger in a Strange Land, Darker Than You Think, the final of the big three sci-fi novels associated with Parsons would be Anthony Boucher's "Rocket to the Morgue." Have you ever checked it out?

I have not yet read "Rocket to the Morgue" but it now goes on my radar screen.