How would RAW vote? How will you? 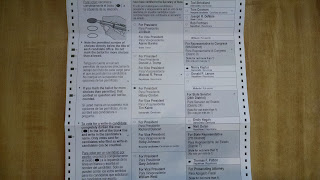 Recently, Kevin Williamson wrote a piece on what William F. Buckley might have thought of the 2016 election,  noting that it's tempting to imagine what WFB would have to say, but concluding, "If you think you know what Bill would have had to say about Trump vs. Clinton — or anything else, really — then you did not know Bill."

It is also tempting to wonder what RAW would have made of the 2016 election, but his political views are not always easy to predict. I know RAW fans who supported Bernie Sanders, who support Hillary Clinton, who support Gary Johnson, who support Donald Trump.

I don't know what upset me more in the current election — the "libertarians" who wound up enthusiastically backing Trump, or the "progressive" enthusiasm for Clinton, despite her record on peace, civil liberties and other issues that Democrats care about when a Republican happens to be in the Oval Office. The only people I could relate to this time were the "lesser of the two evils" voters.

If anyone cares, I supported Johnson but wound up voting for Hillary Clinton in a vote swapping arrangement. The latest polls suggest that Trump is actually leading in Ohio, or at least very competitive. I had noticed on Facebook that a Facebook friend, a woman I knew years ago in Lawton, Oklahoma, had planned to do a vote swap but it had fallen through. I wrote to her and asked if she was still interested, and we agreed that I would vote for Clinton in Ohio, a "swing" state where such a vote is useful, if she would vote for Johnson in Oklahoma where Trump seems sure to win. I had looked forward for months to voting for Johnson, but my trade means that he didn't lose any votes. I would hate to see Trump carry Ohio. That's my ballot, above, before I mailed it in Friday. (I voted for Ted Strickland for Senate after hearing him say in a forum that his most important vote in Congress was against the Iraq War and he opposes U.S. ground troops in the Mideast.)

There is a site dedicated to this sort of thing.

There were no Libertarian candidates, by the way, as the party is not a recognized party in Ohio. Getting Johnson on the ballot in Ohio was a big hassle.

Like you I live in Ohio & have decided to vote for Clinton. I figure if Trump is right & we'll get 4 more years of Obama then maybe it won't be too bad. For me personally, things weren't that bad under Obama. At least I've had decent health insurance under him; no where near the disaster some claim it to be.

I was looking forward to voting for Clinton, since this is my first vote since "coming out" as a Democrat. I'm glad we swapped. It makes both of our votes more meaningful.

Nice! Love the idea of your vote swap. What a great solution for such a weird election!

I really can't imagine what RAW would have thought of all this.

He was really fond of the Clintons at one point, especially Hillary, who he seemed to have a little crush on.

He described HRC as "a very cute lady, and very bright, and I like her a lot." Also, Sound Photosynthesis put out a RAW lecture under the title: "Why I Want to Make Hot Jungle Love to Hillary Rodham Clinton"

Though I don't think his affection would have survived her neocon realpolitiking, just like he went from thinking of Bill Clinton as one of the most intelligent Presidents ever, to calling him six shades of sonuva bitch, after Clinton took up his role in how the sausage gets made.

I can actually kind of imagine a world where RAW would have been angry enough to support DJT as a 'burn it all down' protest candidate.

Though most likely I think he would have used HRC v DJT as a bludgeon to smash up the Euclidean political paradigm, while secretly hoping like hell that HRC would win.

I very much hope HRC not only wins, but absolutely obliterates the concept of white male supremacy as a political platform.

I voted for Clinton. My biggest criticism of her is her apparent support/enabling of fracking. Still, Clinton and Kaine were the only ones to mention investing in clean energy so they seem the only political hope for protecting the environment. Both Trump and Johnson said ridiculous things about global warming that amount to total denial. Best part of the campaign - nightly monologues by Colbert, Myers, Maher and SNL. Best joke - after showing a clip from the 2nd Debate, Colbert operating two sock puppets (in squeaky puppet voice) "You're a puppet, no you're a puppet, no YOU'RE a puppet, etc."

I'm also hoping for what Bobby expressed in his last sentence

@Oz. Johnson made a dumb statement years ago that has been dug up and made to sound like that's what he thinks now, but he got educated:

Thanks for clarifying, Tom.

I think Bobby's correct:
"Though most likely I think he would have used HRC v DJT as a bludgeon to smash up the Euclidean political paradigm, while secretly hoping like hell that HRC would win."

His thinking over at the GADP gives a clue about what he may think now, but when he wrote the GADP platform the election was Gush vs. Bore, as he called them.

I think Bob would have delighted in all the absurdity of this race, but above all he highly valued intelligence, even over personal integrity (look how gingerly he considered Crowley). I think he would have seen Hillary as a competent bureaucrat (with all the B.S. that entails) and Trump as a slimy buffoon operating out of a 2nd circuit "I'm Okay, You're Not Okay" model with just enough 3rd circuit dexterity to speak to anyone else who has gravitated to 2nd circuit fears. Bob's love for television and film might lead him to think that the Trumps are something like a weird cross between The Adams Family, the Corleone Family and the coyote in the roadrunner cartoons.