I keep running into 23


I have been watching the World Series games as much as I can (it really has felt like Cleveland against the world, although of course I understand why everyone outside Ohio is rooting for the Cubs) and I keep running into the number 23.

The above commercial, where "the 23rd time is the charm," has run a lot during the series. 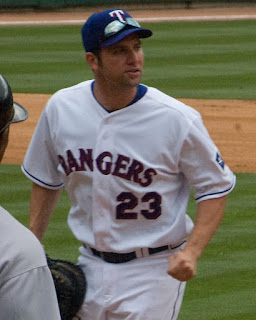 My wife and I have been wearing a lot of Cleveland Indians garb lately. The other day, she put on a T-shirt for one of her favorite former Cleveland Indians players, Ben Broussard, and I noticed it had the same number as when Broussard played for the Texas Rangers, above. The number currently is worn for the Indians by Michael Brantley, the team's injured star outfielder.

Last night, I had the night off from the series, so I read an old story by James Schmitz, "The End of the Line," as it's being considered for a Prometheus Hall of Fame award and I'm on the nomination committee. The climax of the story is about a person hidden away in room 23 of a spaceship.

Ah, so many 23's, so little time! I always take an uptick of 23's as a sign that I'm on a good path, and each one of those buggers is an opportunity to dive down a rabbit hole leading to Eris knows where, although the blue pill is always an option.

There's an extra level when they show up in commercials, movies, television shows, etc.--who put it there? are they pointing to something or just offering a shout out? What else are they planting in their script, wardrobe, background, props?

I haven't followed sports for years, but have the Indians on my radar this year because it's mindblowing to me that they could win the World Series. When I used to go to their games as a kid they were always near last place, but it was always a blast to see the games.

I've been experiencing a few extra 23s lately. I have one association of 23 as a number of transition so wondered if it might signify a transition out of the Cosmic Trigger reading group?

If Cleveland wins in Game 6 tonight, it will be their first World Series championship in 68 years.