Another book that I want 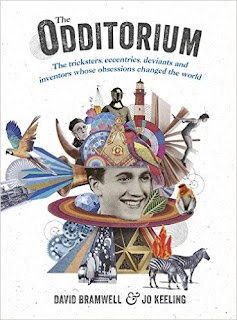 Here's a book I want, published in England but available in the U.S. as an import: The Odditorium: The tricksters, eccentrics, deviants and inventors whose obsessions changed the world, edited by David Bramwell and Jo Keeling. From the publisher: "The Odditorium is a celebration of history's lesser known creative mavericks; the tricksters, subversives and pioneers whose passion and obsession proved there are no limits or rules when it comes to human potential."

One of our British correspondents, Nick Helseg-Larsen, just bought a copy. He writes, "One of the contributors is John Higgs and there is a 4 page piece on Bob as well as others such as Leary, Crowley, Bucky, Watts, and Emperor Norton."
on November 12, 2016

This is the first I've heard of this book, and it sounds like a must-have already.

We can balance the Great Man theory of History with many other models.

I wonder if Alfred Jarry, the founder of 'Pataphysics, is in there. An influence on RAW and many others. And now may be the time to re-read Pere Ubu, among others.