Portrait of a writer 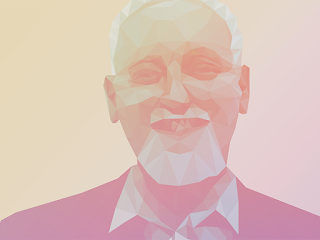 This is a portrait of Robert Anton Wilson I found on dribbble.com (extra "b" is not a typo), by artist Michael Walters of Chattanooga, Tenn.

This artwork is available as a canvas print. See also his other products, such as a nice looking "If you can read this, you are a pope" t-shirt or sweatshirt in a variety of styles.  Counting styles and sizes, there are "23 available products" of the pope t-shirt. Check out his other works to see offerings that may interest sombunall of you, such as Aleister Crowley rendered as a cat.

Mr. Walters is the founder and director of Third Floor Labs. "Third Floor Labs is an artistic design and marketing company driven by technology and culture."

Dribbble.com is a "show and tell for designers" site.