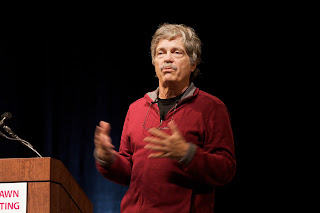 Recently, intrigued by the journey that Timothy Leary (and many others) made from being interested in psychedelics to be interested in personal computers, I finally got around to reading  What the Dormouse Said by John Markoff, on "How the 60s Counterculture Shaped the Personal Computer Industry."

It was very interesting. The "stars" of the book are Doug Engelbart, whose group invented the computer mouse and made other breakthroughs, and Alan Kay, whose team essentially invented the modern personal computer for Xerox, including an improved mouse and graphical user interface.

Here's is an interesting passage on how Alan Kay dreamed up the idea of a laptop and tablet:

Kay became a brilliant synthesizer of ideas. Additionally, he was the first person to approach the design of computers from the point of view of an artist rather than that of an engineer. Coupled with an early and profound understanding of the implication of the scaling principle [i.e., the insight the that the rapid growth in the power of processors would make personal computers possible], he also took an important step beyond Engelbart's notion of personal-computer-as-vehicle. He conceived of personal computing as an entire new medium. In thinking about the computer in this way, he remembered reading about the insight of Aldus Manutius, who some forty years after the invention of the printing press established the dimensions of the modern book by understanding that it must be small enough to fit into a saddlebag. The obvious twentieth-century analogy was that a modern computer should be no larger than a notebook. (Pages 229-230).

It's an interesting book. One irony of my reading decision is that while Markoff documents LSD use in the area and by some of the computer scientists, he doesn't quite convince me that LSD had anything to do with the development of the personal computer in the Stanford area; there were a lot of computer nerds in the area, due to Stanford, the nascent electronics industry in Silicon Valley and defense contractors. In the end, I had the impression that the personal computer developed there because it was where Xerox set up a laboratory, and it was where Doug Engelhart and Alan Kay chose to live and work.
on August 27, 2016

It was this 1972 Rolling Stone article that inspired my interest in computers, there has never been any apparent distance between computers and the counterculture to me.

James, Stewart Brand is an important character in the book and his article is discussed in it.

Well that is interesting, thanks.