Is Gary Johnson a libertarian? 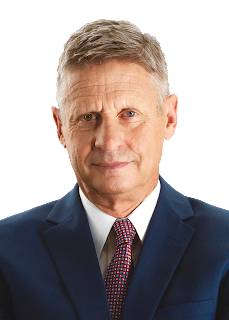 I've been reading debate on Twitter about whether Gary Johnson is libertarian enough to be the Libertarian Party candidate. He and his running mate, William Weld, appeared on CNN's Town Hall for an hour, so I sat down and listened.

I was interested in Johnson's positions on the issues, so I took some notes with my phone. Here were some of them:

• The U.S. should get out of Afghanistan, and should have gotten out shortly after overthrowing the Taliban about 15 years ago.

• He defended the ownership of semi-automatic rifles and said outlawing them would turn millions of Americans into criminals.

•  He said he opposes the "imperial presidency."

• He said Utah's current law strikes a good balance between gay rights and religious freedom. (I'm not familiar with that law.) On bakeries serving gays, he said businesses should sell wedding cakes to anyone who walks in the door but have not obligation to decorate any cake a certain way.

• He defended immigration and free trade.

• He favors legalization of marijuana and believes the federal government should deschedule pot as a class one narcotic. (He wouldn't legalize heroin.)

• He would eliminate the Department of Education. More generally, on the size of the federal government, he would cut spending 20 percent to deal with the deficit.

• When asked about terrorism, he said government isn't omnipotent and can't stop every attack. "These things are going to happen."

My conclusion is that by any reasonable real world standard, Johnson is a libertarian, although he doesn't go as far as some libertarians would on some issues. Jack Hunter says that "Johnson is a serious 2016 presidential candidate who is also generally and significantly libertarian," and that seems about right to me. Scott Sumner also weighed in recently, pointing to a long interview Johnson gave to the Los Angeles Times

It was interesting to hear from Johnson himself, as opposed to reading about him. (The Green Party's Jill Stein will appear on the show with her running mate on August 17, 9 p.m. Eastern time).

I'm not telling anyone how to vote; that's not what this blog is about. Think for yourself, as Timothy Leary says.
on August 06, 2016