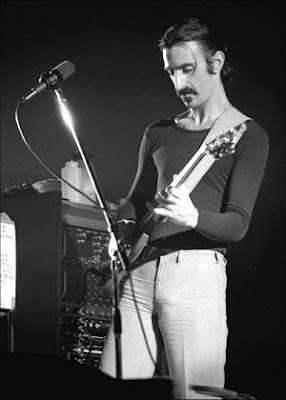 I've been listening to Frank Zappa lately (I've been a fan of his music for years) and I'm struck by a couple of things (1) He died in 1993, so he's been dead for more than 20 years and (2) He strikes me as being a bit of a kindred spirit with Robert Anton Wilson.

I'm not claiming that Wilson was a Zappa fan (although he once endorsed Zappa's campaign for president).

But it seems to be that both were "postmodern" before the term became widely current, in the sense that they both combined high culture and pop elements. Wilson saw no reason why he couldn't be influenced by Raymond Chandler and H.P. Lovecraft, and also by James Joyce and Ezra Pound. Zappa was into rock and blues and R and B, but also jazz and modern composers.

Both appeared at a convention devoted to William Burroughs,  and the "cut-up" technique popularized by William Burroughs and invited by Brion Gysin. Illuminatus! would be the example for Wilson.  As for Zappa, I've been listening recently to the Sheik Yerbouti album, which features songs that end abruptly and an album track list that shifts abruptly from typical Zappa ditties to instrumental jazz rock pieces to spoken word bits with sound effects. Sometimes the shifts appear within the same song.
on August 16, 2016

I enjoyed Zappa's book because it had the sense of humor without the music.

Aaaaand Zappa gives a shout out to The Church of Subgenius in his book.