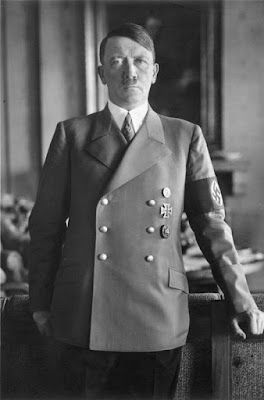 I've recently finished a book about World War II by Andrew Roberts, called The Storm of War. There's a lot I could say about the book — that its military judgments seem generally sound, that Roberts obviously put a lot of work into it, that he's a little too hard on Irish neutrality and a little too easy on Winston Churchill — but I've been spending the last few days letting my mind be boggled by the closing salutation in a letter from Adolf Hitler that Roberts quotes, "Kind regards, Adolf Hitler."

"People who like to write witty, nasty things about other people are not generous or charitable, to put it mildly. We should all try to give out as much good energy to other human beings as we possibly can. I honestly believe that every bit of bad energy we put out has adverse effects that go on forever. This is the Buddhist doctrine of karma. The Buddhists believe that every bit of anger, resentment, hate, and so on that goes out passes from one person to another, without stopping. The same is true of good energy: every bit of good energy one puts out makes someone else feel a little bit better. I think if people were really conscious of this psychological fact, they would try very, very hard to put out nothing but good energy, no matter what happened to them. They would certainly not be so casual about passing on bad energy. All the bad energy in the world builds up like a giant snowfall, until we have a huge war. Nowadays, it can mean a total nuclear Armageddon. This is traditional Buddhism, as I say, but I think it’s materialistic common sense, too. One only needs to study human behavior to realize it. I regard those people who make a career out of being nasty as emotional plague carriers."