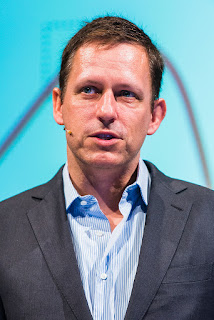 An article from Vanity Fair about Thiel's life extension efforts. The article ends with these sentences, which sound a lot like what RAW used to write: "He’s also signed up with cryogenics company Alcor to be deep-frozen when (or if, a more optimistic death-cheating evangelist would say) he dies. There are three ways you can approach death, Thiel has said. 'You can accept it, you can deny it, or you can fight it. I think our society is dominated by people who are into denial or acceptance, and I prefer to fight it'."

Via Charles Faris, who's probably going to make a big deal about Thiel bragging he'll never die unless someone drives a pointed wooden stake through his heart. I'm just kidding. I think ...

My sound bite du jour regarding Mr. Thiel, after listening to his RNC lament that The Government hasn't yet (spent the massive tax dollars necessary to have) gone to Mars--Funny position for a conservative Republican/Libertarian.

The government already *has* gone to Mars. Just not with human passengers. The US's 1969 Moon landing was basically a political stunt meant to counter the Soviet's original 1959 unmanned Moon landing. Without the Cold War there was no motive for the US to continue to compete with anybody for Space. Thiel's ideas clearly reflect the small but influential Transhumanist movement https://en.wikipedia.org/wiki/Transhumanism
particularly in its Extropian https://en.wikipedia.org/wiki/Extropianism#The_Extropy_Institute
version.