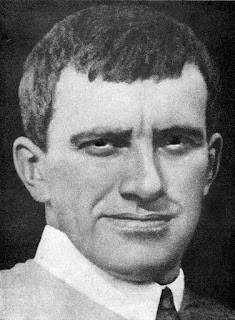 As I re-read this appendix, I began to wonder how much of the theory could be linked to the Illuminati and Adam Weishaupt, and how much was just something that Wilson and Shea made up. Many of the references in the piece seemed amusing spurious, e.g. "In a well-known passage in the Necronomicon," and  Weishaupt importing peyote from Mexico "at great trouble and expense."

Sensing that I was in over my head, I emailed Eric Wagner, Adam Gorightly and Michael Johnson, and asked for help. I wrote, "Does this come from Discordianism, or did Adam Weishaupt write anything like this, or did Wilson and Shea just make it up? I would appreciate any pointers."

Adam wrote, "I'm guessing mostly made up by Wilson and Shea."

Eric wrote, "I would agree with Adam. I've spent a fair amount of time with this appendix the last few years thinking about Bob Wilson's use of five sectioned texts. Rereading the appendix this week I think about applying this theory of history to my 17 years at my current job." (Eric is a teacher at a California school.)

Michael wrote, "I think it's RAW and Shea getting creative with Joachim of Flores, Vico, Hegel and then many other serious historiographers' propensities to delineate X Number of True Epochs in human history. Oddly, the idea that these epochs would repeat as a cycle seems far more common than one would guess before diving into these Grand Schemas/models. I read a book on cyclical models of history (forget the title...was it by Frank Manuel?)), and the author broke the models down into 1.) thinkers who saw the cycles repeating, but on a sort of ascending spiral: the repetition holds, but things never literally repeat exactly as before, and there's progress of some sort; and 2.) thinkers who seemed to be saying that things will literally repeat: you know how you're sitting somewhere, in that shirt, reading this email? It will all happen again, some day, somewhere and somewhen, exactly as you are now. IIRC the Hindu idea of "kalpas" was one of these, and Nietzsche too...but Fred had to have been pulling our legs, right?

"There's plenty of textual evidence in RAW's 1960s writing that the idea of some intellectuals having the inside track on how History will go was bullshit and dangerous. Look at his advocacy for Popper's _The Open Society and Its Enemies_, which attacked Plato and Marx especially, as one example. (I think Leo Strauss and the Wolfowitz/Cheney NeoCon reading of "the Truth of History" proves Popper was onto something.)

"However, I think RAW liked Weird Ideas as part of some sort of Divine, poetic imagination. And I think he sees Joyce's use of Vico in this regard in that way. In a sane society, Weishaupt's writings would have been translated into English by a bona fide scholar by now."

The Wikipedia article on Adam Weishaupt indicates that some of Weishaupt's works have been translated into English, although some of the translations seem to be quite expensive.

The explanations of the various stages in history include examples of people who supposedly represent the corresponding astrological signs, and while some of these folks are quite familliar, some of them were obscure to me. Vladimir Mayaskofski, listed on page 752 as a "typical Cancerian," was a Russian Futurist who had a controversial life and even a controversial aftermath to his death. He was associated with the Russian avant-garde, a movement I'm interested in (particularly the music produced by composers associated with the movement.)

Nietzsche's belief that everything would repeat exactly over and over again strcuk me as an inability to understand the infinite.

I found it interesting that Bob S. and Bob W. said, "Tolstoy, however, as the classic dropout, is an archetypal Grummet persona". In a few years I plan to get deep into Tolstoy once I finish my Wilson/Joyce project.

Wilson and Shea's love of the Lovecraftian mythos is evident throughout the trilogy, however, was it novel for the time? That is to say, how much credit should they be given for the Cthulhu boom we find ourselves in the middle of now?

The path represented by gimel appears a major occult theme of "Illuminatus!" so it makes sense to associate their first historical stage, Verwirrung, with the High Priestess, the tarot card that corresponds with gimel.

The tarot cards associated with the remaining four stages, The Hanged Man, The Fool, The Tower and The Lovers also illustrate important themes in the novel.