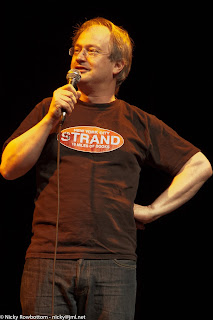 A Tweet from Robin Ince: "most useful phrase I've learnt in last few years is "REALITY TUNNEL".Constantly questioning why we believe what believe. Thanks T. Leary." (The Tweets to Ince and his replies make it clear he's a Robert Anton Wilson fan. Leary came up with the concept but RAW helped develop it and popularize it.)

More evidence of his RAW interest: He is the only celebrity I've ever run across on Twitter who follows me.

I have to admit that I only know Ince's name because RAW fans in Britain like him, but he has 114,000 followers so he must enjoy a big audience. He's an actor and comedian, best known for his BBC radio show, "The Infinite Monkey Cage." BBC radio isn't as big over here as BBC TV, but fortunately the show is widely available as a podcast, so I can check out soon.