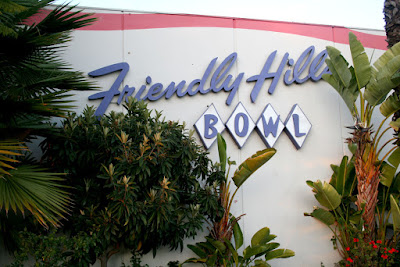 The Friendly Hills bowling alley in Whittier, identified by Discordian historian Adam Gorightly as the birthplace of Discordianism.

Buddhists got a big lesson in the religion/philosophy's teachings on impermanence when the Taliban blew up the big statues of the Buddha in Afghanistan. Now it's the turn of Discordians to learn that nothing lasts forever.

Via Twitter, Discordian historian Adam Gorightly points out that the "Brunswick Shrine" has closed. This is Friendly Hills Lanes in Whittier, which Adam has identified as the birthplace of Discordianism, where the goddest Eris revealed her secrets to Kerry Thornley and Greg Hill. For Adam's evidence in pointing to this particular bowling alley, see this blog entry.
on June 17, 2015