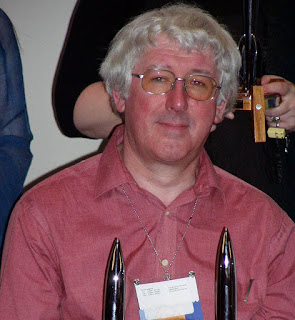 David Langford, with some of his Hugo awards.

As I believe that sombunall of you are interested in science fiction and science fiction fandom (there is at least some overlap between RAW fans and SF fans, maybe besides me and Arthur Hlavaty, now equipped with a more clear vision than ever), I wanted to pass on the tip that David Langford, the British author and big name fan, has prepared some ebooks for free download.

The offerings include THEN, Rob Hansen's history of British fandom from 1930 to 1980 (the equivalent, I presume, of Harry Warner Jr.'s chronicles of American fandom) and some reports on TAFF trips. (That is, the Trans Atlantic Fan Fund, which pays to send fans across the Atlantic Ocean. In such cases, it is customary to write a trip report.)

Mr. Langford also has some electronic books for sale, available to customers in the U.K., the U.S.A. and other non-European Union nations. They collect his fiction, his criticism, etc.

Langford's monthly Ansible newsletter, by the way, is the perfect choice for people who don't have a lot of time but who don't want to lose touch with science fiction and fandom. I don't read Locus, which would involve a time investment that I don't feel I can make but Ansible, a very compressed newsletter, keeps me in the loop.
on June 03, 2015

Thanks for the mention. Langford is a genius; I highly recommend his books.