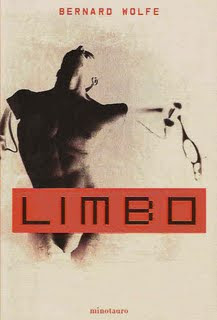 The always-interesting Michael Johnson posts about Rachel Donezal, Caitlyn Jenner and Self-Definition, "Passing" and the Myth of "Race." It's a really good post, and I've posted a comment there.

But given the orientation of MY blog, I want to take up a brief aside in Michael's piece, one that made me sit up:

Bernard Wolfe, like Robert Anton Wilson (their careers as writers have much in common), who actually wrote the book, went to Yale, was with Trotsky in Mexico, was guided into a career of writing porn by Henry Miller and Anais Nin: Wolfe needed something to pay bills and wanted to keep up his writing life, was influenced by Alfred Korzybski and Norbert Wiener and a psychoanalyst named Edmund Bergler, and wrote a science fiction book called Limbo, about which scholar Carolyn Geduld writes, "In its own way, Limbo may be as difficult a book as James Joyce's Ulysses. The latter imposes difficulties of form on a relatively simple narrative, while Limbo uses a simple form - the science fiction, antiutopian novel - to discuss very complex theoretical material."- from Bernard Wolfe, by Carolyn Geduld, p.73...Enough of this digression...

But not enough for me!

My knowledge of Bernard Wolfe is pretty much limited to having read two stories and a long afterward many years ago in Harlan Ellison's Again, Dangerous Visions science fiction anthology, but there's a pretty good Wikipedia biography you can read.

I dutifully pulled my old Science Fiction Book Club edition of ADV off the shelf after reading Michael's passage.

It's true that Wolfe and Wilson both worked at Playboy magazine, and had wider writing careers. Both had an acquaintance with a certain era of New York bohemia. It's interesting that Wolfe was influenced by both Korzybski and Wiener. Both were interested in jazz and the black experience.

I can also notice differences, at least on the basis of Wolfe's Again, Dangerous Visions appearance. In his afterword, Wolfe rants about the space program (the most important thing that can be said about it, apparently, is that it gave the sitting president, Richard Nixon, opportunities to appear on TV), about how much he dislikes science fiction, and how much he dislikes the "two deans of sf" who appeared on TV during broadcasts about the Apollo missions. If he's talking about Arthur C. Clarke, he's dissing someone who was a far more important public intellectual than Wolfe. It isn't even close.

Wolfe was a Trotskyists in the 1930s. In the afterword, to his ADV stories, he writes, "I have a dangerous vision. I see capitalism once and for all overthrown ... " The book has a 1972 copyright. So Wolfe spent decades mouthing the same left wing cliches, carefully ignoring what the overthrow of capitalism actually amounted to in practice. The difference between Wolfe and RAW's questing, protean attitude toward politics seems pretty vast.

In his intro the the Wolfe stories, Ellison strongly recommends Wolfe's only science fiction novel, Limbo, which I clearly should read.

When I looked at the table of contents of ADV, I remembered that Ray Nelson's "Time Travel for Pedestrians" was actually the most RAW-like story in the anthology. I then looked up Ray Nelson on the Internet. So in the end, I wound up wishing I had read more Nelson. Dig this article on "The Last Days of Philip K. Dick," Nelson's childhood friend.

I mostly agree with you about Bernard Wolfe: Old Left Marx/Freud reductionism and a mean streak you could run six lanes of traffic on. Bit he had a sense of humor and wrote great dialogue. I particularly liked The Late Risers.

I saw a similarity in "careers" as writers. Their interests intersected in many interesting ways, but Wolfe was 17 yrs older than Wilson. If I'd have known you were going to seize on my passing thought, I'd have been more careful: I confess I wanted more RAW fans to check into Wolfe.

There's somewhere in my notes where RAW says he admires Wolfe's writing. He quotes Wolfe a few times, for example, in _Sex, Drugs and Magick_:

What I was privately thinking when I suggested the similarity of CAREERS as writers: they both came from the East Coast, and ended up on the West Coast. They both were trained for "responsible" careers (Wolfe: psychology/psychiatry; RAW: engineering), but they gave that up to be writers. They both "dreck" for money and they both compiled oeuvres - both non-fiction and fiction - that were so erudite and odd that the New York intellectuals didn't review them. They both had/have a sort of "cult" status. They both went through a Trotsky phase. I think Wolfe lived too early to let the 1960s rewire his orientation.

I see both writers as producing a body of work that cultural curators tend to not understand fully (or even know about), and if they do know about their work they don't know how to classify them. Both writers were very much free agents who were massively erudite and used much humor. Neither guy belonged to a school, but Wolfe's main exegete (as far as I can tell), Geduld, seems to see Wolfe's influence, the psychoanalyst Bergler - who thought humans had a masochistic streak that is the Big Deal in human history - as possibly too influential on Wolfe's post-Really the Blues book.

Similarly, it can be argued that RAW was perhaps too influenced by Wilhelm Reich for a time, although I personally find this one of the more fascinating and intriguing aspects of RAW's thought.

I could go on, but your point is well-taken: there are crucial differences between the two, and my lines were probably too facile.

Bergler was the Savonarola of Freudianism: All sex other than monogamous man-above babymaking was "Neurotic Counterfeit-Sex." Wolfe loved his theories, which was a big part of what was wrong with Wolfe.

No, not too facile at all: I'm fascinated by the comparison. I love the way you toss off interesting ideas.

Which Wolfe books should I try? Thinking of Limbo.

My impression is that Wolfe was treated better by critics; true?