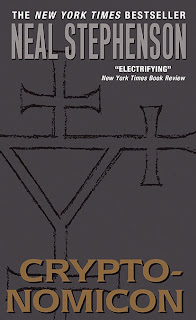 When Illuminatus! is compared to other literary works, Gravity's Rainbow and Mumbo Jumbo usually are mentioned. Without attempting to say anything about what it "means," I have noticed parallels with Neal Stephenson's Cryptonomicon.

1. Illuminatus! and Cryptonomicon were both breakthrough novels for their authors; much of what Robert Anton Wilson wrote after that referenced the Illuminati. Cryptonomicon was Stephenson's first very long novel, but all of his subsequent novels have been of similar length.

2. Both works are very long novels, although Illuminatus! originally was broken up and published as three mass market paperbacks.

3. Both novels reference a secret society that uses magic. In Illuminatus!, of course, it is the Illuminati. In Cryptonomicon, the mysterious Enoch Root apparently has a secret life and apparently knows how to revive people who have died; there is more about this in the Baroque Cycle.

4. Both novels have libertarian themes, and both won the Prometheus Hall of Fame Award.

5. Both novels explicitly reference the work of H.P. Lovecraft. Lovecraft appears as a character in Illuminatus!, which uses the Cthulhu Mythos. The title of Cryptonomicon references the fictional work that Lovecraft made famous, the Necronomicon.

6. Both novels feature, as a major plot element, a clandestine group which seeks to hide its activities and secrets from an enemy. In Illuminatus!, this would be both the Illuminati and their opponents. In Cryptonomicon, Bobby Shaftoe belongs to a secret unit which carries out operations designed to hide the fact that the Allies have cracked the Axis' communications codes.

7. Both novels feature an appendix which provides a code for communicating secret messages. In Illuminatus!, see "Appendix Beth: The Illuminati Ciphers, Codes and Calendars. "Cryptonomicon has an appendix written by Bruce Schneier, explaining how to use a low-tech method that Schneier invented for using a pack of playing cards to encode messages.

8. Both novels spawned a series of prequels, historical novels that feature ancestors of the novels main characters. In Wilson's Historical Illuminatus series, the characters include the ancestors of Hagbard Celine, Simon Moon, etc. Stephenson's Baroque Cycle has the ancestors of important Cryptonomicon characters such as Bobby Shaftoe and Lawrence Waterhouse. Both prequels mix fictional and real people, and both feature a major composer as a character; the Wilson books have an appearance by Mozart, while Handel pops up in the Baroque Cycle.

9. Both novels have plots that range across much of the 20th century and feature World War II as a major plot element.

11. Both works can be linked to the ideas of Peter Thiel. According to the Wikipedia article on Cryptonomicon,  Thiel has said that the book was required reading in the early days of PayPal.
I am not going to claim that Thiel is a fan of Illuminatus! or has ever heard of Robert Anton Wilson; however, as I have noted, as a philanthropist Thiel has funded many of the ideas RAW pushed in the 1970s, including life extension, intelligence increase and making it possible to migrate into space.

12. Illuminatus! has been described as a counterculture encyclopedia, while Cryptonomicon can be described as a book that covers many of the uses and possibilities of personal computers. So you could say that Illuminatus! covers what Timothy Leary was interested in early in his career, while Cryptonomicon tracks nicely with Leary's later interest in computers, and with the way computer culture succeeded drugs and radical politics as the focus of the California counterculture. 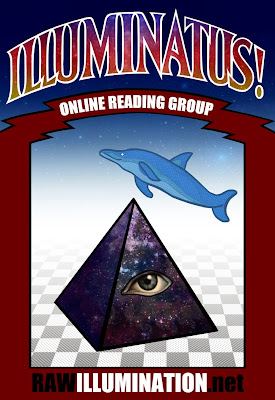 They are both anatomies, a category defined by Northrop Frye as made up of large books in which the central plot is subsidiary to digressions, copias, lists, set pieces, parodies, and other sideshows, creating a whole larger than the sum of its parts. Likewise Strange in a Strange Land

This makes me want to read "Cryptonomicon." Thanks for posting.

Also Ulysses, Stand on Zanzibar, John Barth's Letters (and other books of his to a lesser extent), The Recognitions, Ciphers, by Paul Di Filippo; and The Public Burning. With a bit of stretching, we could include my two favorite works of Big Trash, The Carpetbaggers, by Harold Robbins, and The Godfather, by Mario Puzo.