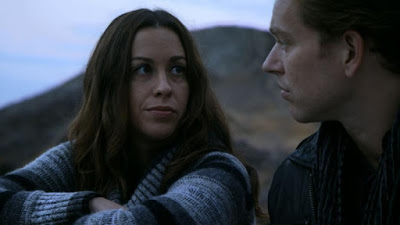 If you are a RAW fan, you are likely a PKD fan, as in Philip K. Dick, so I'm passing on to you the news that a rather faithful adaptation of one of his books is available for free online viewing in many areas. "Radio Free Albemuth" came out in 2010, but as far as I can tell it didn't get wide release.

It's available for viewing now on Hoopla, the digital service that offers streaming movies, TV shows and audiobooks and downloadable ebooks for patrons of the libraries that subscribe to it. Hoopla is widely available in Ohio, where libraries are well-funded, widely unavailable in Oklahoma where libraries aren't. I watched it on my tablet computer when I finally got a couple of free hours on a recent day off.

The selling point of the film is that it's a pretty faithful adaptation. Well known Twitter Dick fan Ted Hand  calls it his favorite Dick movie. I think I still prefer "Minority Report" and "The Truman Show." (The latter isn't an adaptation of anything Dick wrote, but it seems Dickian to me.)

In a way, "Radio Free Albemuth" is kind of an inversion of "Bladerunner." "Bladerunner" looks great, has fine special effects, and is well acted with big name stars. But it's kind of shallow, and not much of an adaption of the excellent "Do Androids Dream of Electric Sheep?," the excellent Dick novel that's the purported source. RFA has people I mostly didn't recognize, except for Alanis Morissette, who looks pretty good onscreen — I wonder if she's a Dick fan? The special effects in RFA are nothing to shout about, but it seems to be pretty close to the novel (I'm relying on the Wikipedia summary, I haven't read the book yet) and has the PKD paranoia and weirdness you expect.

I wondered what Jesse Walker, Dick fan and movie critic, thought of "Radio Free Albemuth," so I Googled. Here's his "review," cobbled together from comments posted to his recent Philip K. Dick article for Reason: "The recent Radio Free Albemuth adaptation was pretty loyal to the original novel. The main difference was that they changed the years in which the story was set. The movie is OK. Some parts of it work really well, but I don't think the denouement really comes off."

If you register at Hoopla, it will help you figure out if you have a nearby library where you can obtain a library card.

RFA is also available as a streaming video ($2.99 for 7 days) on Amazon.com

I absolutely loved RFA, the novel. I'd been meaning to read PKD for quite some time. I was fascinated by RAW's description of his 2-3-74 experience in Cosmic Trigger. But I just kept reading about Dick, rather than actually picking up his books.

Seeing that his 2-3-74 experience really interested me, Valis seemed like the obvious choice. But I read a little bit about "PKD for beginners" and learned that Valis can be a bit of a task for newbies. RFA was regularly suggested as the easier to read (but less good?) version of the Valis events. It did not disappoint.

It has a bit of paranoid political conspiracy intrigue, which is my favorite, combined with the kind of cosmic, metaphysical philosophizing that characterizes much of Wilson's (and I gather Dick's) work. I couldn't put it down. I subsequently bought Valis along with the other Dick stories that are part of its loose trilogy and am excited to get into them.

I've found myself detouring on some of Dick's earlier sf, and am thoroughly enjoying it. But really can't wait to continue reading about the Valis events.

Dick has been the first author to pull me away from my fun, going on two year, RAW track that this blog put me in. Nice change of pace.