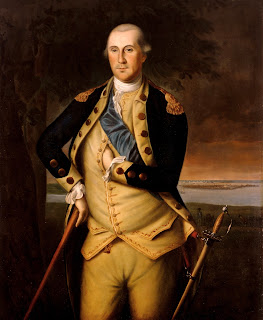 George Washington, father of his country and the hemp-growing industry.

(This week: End of Leviathan and beginning of the appendices! "George was thinking. He remembered something," page 729, to page 742, "call Gold and Appel Transfers and leave a message.".)

This week takes us to the end of Leviathan (where the most important secrets of the plot are revealed to George, and again revealed to the reader, in case he/she/it missed them earlier) and into the first two appendices.

At the beginning of the appendices, it is stated that there originally were 30, but that eight were omitted "due to the paper shortage." This seems to accord with statements by the authors and by the work's editor, Fred Feldman, that significant cuts were made in the manuscript when Illuminatus! was edited and printed (see my interview with Feldman).

So what happened to the missing appendices?

Robert Anton Wilson was asked about the cuts in the Lewis Shiner interview: When asked about whether any of the cuts in Illuminatus! would be restored, Wilson said, "No, all that got lost."

D. Scott Apel claims that some of the material that was cut from Illuminatus! was published as The Illuminati Papers.

The same thing is hinted in issue No. 10 of Robert Shea's "No Governor" fanzine, in the lettercolumn. Roldo (an artist apparently known by only one name) wrote and said he'd like to see some of the missing pages from Illuminatus!, for example more on the Tarot from Miss Portinari. Shea replied. "There's more on the Tarot in other books by Robert Anton Wilson, such as Prometheus Rising. Wilson's ideas bear a striking resemblance to those of Miss Portinari and Mordecai the Foul. Nothing is every lost."

I have speculated that the "Anarchism and Crime" article by Wilson and Shea is a missing appendix from Illuminatus!; it reads like one, but I don't know how to prove it.

Many of Wilson's collections of essays contain material that would not have been out of place in the Illuminatus! appendices. It's impossible to know now how much of that could be material written for Illuminatus! or a rewrite of such material.

A few posts ago, I compared Illuminatus! to Neal Stephenson's Cryptonomicon, noting each novel's relationship to a series of historical novels that followed. I don't want to push the comparison of Illuminatus! and Cryptonomicon too hard here (it's going to be a separate blog post) but I noticed that Illuminatus! has an appendix which contains a cypher for sending secret messages, one that can be rendered using the cards in a Tarot deck; Cryptonomicon ends with an appendix by Bruce Schneier on Solitaire, a low-tech system for encoding messages that uses a deck of playing cards. 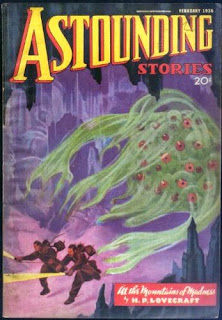 Original magazine cover illustration for H.P. Lovecraft's "At the Mountains of Madness," mentioned in the appendix.
.
(Next week: Appendix Gimmel, The Illuminati Theory of History,  pages 742-756.)
on June 01, 2015

p.730 - Hagbard's comment about "Every golden apple..." near the top of the page seems related to Leviathan and F**KUPs nuptials mentioned a couple of paragraphs later.

p.732 "... the most heartbreaking beautiful sight he had ever seen..."
I see this statement as relating to a Sufi doctrine found in Rumi's poetry that when the heart gets "broken" or shattered it tends to regroup stronger than it was before if one can maintain the thread. Also connects with 'solve coagula' of alchemy and with Nietzsche's aphorism that what doesn't kill you makes you stronger.

The last sentence, "The earth below him cracked" connects with "The Earth quakes..." from the 2nd paragraph of the whole book; reminiscent of "Finnegans Wake."

The entire last page nicely expresses the qabalistic notion that Malkuth is in Kether and Kether is in Malkuth in another fashion.

p.733 "...Herald-News-Sun-Tribune-Journal-Dispatch-Post..." seems a concise, thumbnail description of some themes from "Illuminatus!" "Tribune" contains deeper layers: Tri = 3 while each of the remaining letters corresponds to a tarot trump to make a cohesive statement.

p.742 - "If you need quick transportation to Panama," he added, heading for the door, call Gold and Appel Transfers and leave a message." Compassionate qabalists will sometimes suggest when to add. Adding the initials of the first sentence here by the method called Notariqon (p+y+n+q+t+t+p) we get 268. 2 = Beth, whose Appendix this concludes, and also relates to both communication and practicig magick as does this qabalistically rich final paragraph. 68 I've mentioned once or twice before.

"Panama" adds to 173 = "lighten mine eyes." Hierophants often appear to be looking for help.

"Gold and Appel Transfers" = 13 (Notariqon of the caps) = Gimel the path corresponding to the High Priestess i.e. the journey across the Abyss that connects Tiphareth with Kether, another major occult theme of "Illuminatus!" The phrase "heading for the door" that precedes indicates the same path. The transfer of the "e" and "l" (apple to Appel) also bears relevance; e = The Star (tarot) = radiant love; l = Justice or Adjustment (tarot) = truth = "the woman satisfied."

Maybe this is obvious, but, I think that the appendices, being as they are named after the paths, (and chapters being named after sephirs), link the chapters.