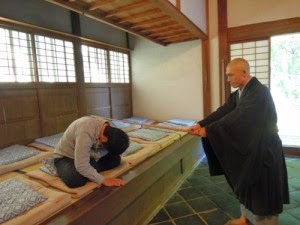 Enlightenment on a stick, Zen style.

The connection between Buddhism and the Celine System seems to me to be key here, and I thank Dutch Discordian and scholar Christian Greer for his comment in the last entry that got me thinking along those lines.

Buddhism diagnoses "craving" or "thirst" as the source of suffering, and the object of the "Buddha's method," e.g., understanding the Four Noble Truths and The Eightfold Path is to achieve liberation by easing the craving.

Harry Coin gains a moment of sudden insight and peace when he give up the fear of death: "then, for the first time in his life, Harry Coin knew peace, as he relaxed into death," page 504. Compare with Robert Anton Wilson's well-known saying, "The fear of death is the beginning of slavery."

Attachment is described on page 506 as The Tar Baby Principle, with anarchism described as giving up attachment "to a god or a government, for direction or strength," much as James Joyce's alter ego gave up attachment to government ("non serviam") and to the Catholic Church in Portrait of the Artist and Ulysses.

On page 507, the Zen Master helps the student give up his attachment to theory about Buddhism by hitting him with a stick.

Being attached to being beaten to a stick seems like another form of attachment to me, but I have to admit that I'm no Zen expert.

"had started with two handicaps," page 506. Compare with the only "weapons" James Joyce allowed himself — the nonviolent weapons of "silence, exile and cunning."

Hotel Claridge, page 499, an old hotel in New York City mentioned in Midnight Cowboy; it's no longer there.

Calley, page 499. William Calley was the American officer blamed for the My Lai Massacre in Vietnam; hence his association in the text with Eichmann. "Don't take it too hard," Calley said. "We're only following orders." Page 499.

(Next week: "Hate, like molten lead, drips from the wounded sky," page 513, to page 523, "I'll take some more of the medicine when my mind starts crumbling.)

The "patriotic stickers" were probably inspired by the similarly designed "Fuck Communism" stickers The Realist created in the 60s to mess with the heads of those who hated both Communism and Bad Words.

I had a red, white and blue "Fuck Communism" poster that I displayed in my dorm room when I started college, although I was not sophisticated enough to know who "Paul Krassner" was.

RAW and Leary collaborated on a terrific piece on Calley and Eichmann in Leary's _Neuroplitique_.

See: "How To Wash Brains", pp.51-62. Eichmann may not be mentioned, but the dynamic of "obedience to authority" under psychological techniques - there's lots of Patty Hearst and Squeaky Fromme - get fleshed out really well. Apparently RAW co-wrote it with Tim while Tim was in "San Diego Federal Prison."

Hagbard demonstrates quite a bit of telepathy/mind-reading in this section.

"Celine System" CS = 68, an important number in this book as I've mentioned previously.

Getting confronted with death appears an age old initiatory technique.

Relative to being attached to getting wacked by a stick to wake-up, Crowley says that the last attachment to give up is the desire for supreme enlightenment.

Thanks for the shout out (however, I just work at the uni. of amsterdam, I am from Turtle Island).

In response to your comments, I was trying to separate the Buddhist aspects of Celine's system and the individualist anarchist parts. This system seems to be based on breaking the logogram (social programming) so as to allow the biogram to act naturally ('manifest' the unborn mind in the Buddhist sense). There seems to be a much heavier Buddhist aspect to the system as it is based on the logogram loosing its grip on your mind. The system helps you detach. This is the opposite of the individualist idea of going more and more towards the ego; abandoning all else for the sake of your own ego.

where they meet in in the belief that the self is divided between social programming/conditioning and the true self. The true self is either your 'unborn face' or the 'overman'. For Hagbard, the true self seems to moved between these two poles. Here, as you suggest, there is more stress on the idea that conditioning and mental chatter divide the natural dao of the non-dual self.

Likewise, Manic the Doodler, what a great connection. I totally see it.

Oh, as to the use of violence in Rinzai, I am under the impression that the swinging of the stick is a degenerate institutionalization of a tradition of spontaneous 'grandmotherly' violence.

From my friends who stayed in monasteries, I was told that the stick does not hurt that much (it can even be a welcome means of alleviating tension in the neck), however the noise is supposed to wake you up from your thoughts.