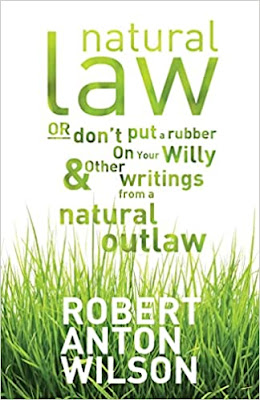 Hilaritas Press has announced the publication of two new titles, Natural Law, Or Don’t Put A Rubber On Your Willy And Other Writings From A Natural Outlaw by Robert Anton Wilson and From Now to Now, the autobiography of German abstract artist Marlis Jermutus.

The new edition of Natural Law is essentially a new book; although it reprints a long essay RAW wrote which had been published as a short book earlier and has now gone out of print, the new edition also adds a dozen pieces of additional material, both essays and interviews, making it essentially a new book. The editor, Chad Nelson, did a fine job of selecting the additional reprints, and when I served as a volunteer copyeditor for Hilaritas, I discovered Chad had put together an excellent book, one I'm really excited about. I'm interviewing Chad now, and that interview about the book should appear soon. See the link to the Hilaritas announcement for links to buy the book. As of now, Hilaritas is still struggling with Amazon to get the Kindle available, but it should be there soon.

The Hilartitas Press announcement has quite a bit about From Now to Now, including a review of the book by Christina Pearson, RAW's daughter. "I love this book. As a mature woman of these times, as a childhood abuse survivor, as a hard worker, as a trailblazer, as someone who never wants to be boxed in, and has always wanted to do and be the best me I can, she spoke directly to my weary heart in so very many ways," Pearson writes.

You can read my 2018 review of an earlier edition  and there is also my interview with Jermutus, which includes discussion of her friendships with Timothy Leary and Robert Anton Wilson (Leary influenced her decision to move to California.)

Email ThisBlogThis!Share to TwitterShare to FacebookShare to Pinterest
Labels: Chad Nelson, Marlis Jermutus, Natural Law, Or Don’t Put A Rubber On Your Willy And Other Writings From A Natural Outlaw

The colour photographs are a welcome bonus to Marlis's book; newcomers will be in for a treat. Thanks for posting up these interesting links to her life and art.
I ordered Natural Law a few days ago, so it will be interesting to see if it is printed in the UK or if it has to travel over the pond.

Perhaps it has been there for a while and I simply did not pay attention before, but I note that the Hilaritas website has an 'upcoming authors' page:

"We are really excited about three other authors whose work we appear to be in the process of preparing for publication, but it’s way too early to say anything more than that unsatisfying teaser.

In the future we will be more actively looking for adventurous writers who are similarly interested in futurist ideas, unafraid of Model Agnosticism and willing to consider Guerilla Ontology. We’ll keep you posted on our progress."

I feel very curious about whom they might be.

Reading Znore's book, I wish more RAW-influenced bloggers would get their writings published in book form. I especially like some posts from the Overweening Generealist or Oz Fritz' blog. Peter Quadrino on Finnegans Wake also has interesting things to share. But, as the MaybeDay zine New Trajectories has shown, there is no shortage of people with ideas in this community!

Hey Spookah, thanks for the comment. We just put up that "Upcoming Authors" page... so you were actually paying good attention. We decided to put that up as we now have three authors aside from RAW, and as we note, we are working with others. At the moment no contracts have been signed, so we are hesitant to be specific. If you are signed up for the RAW Trust Newsletter, you'll be the first to know about the latest news.

Yes, thank you for your answer Rasa. It's good to know that Hilaritas is growing and expanding their horizons.
The newsletter is always a pleasure to read, and now with the podcasts I'm happy to get one in my mailbox once a month.
Keep up the good work!