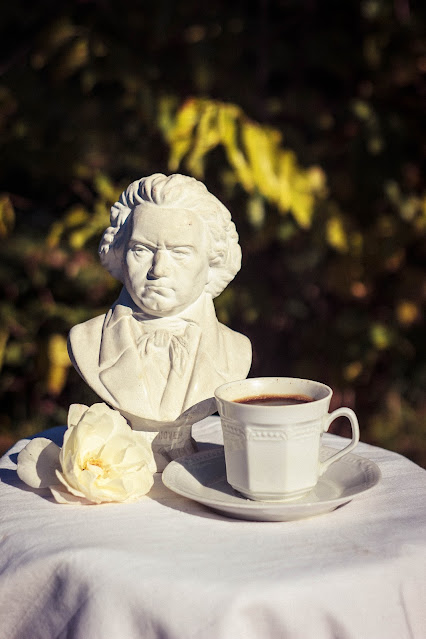 Photo by Maria Lupan on Unsplash

In Chapter 11, Robert Anton Wilson talks about various ways to activate the fifth of the eight circuits, the neurosomatic circuit, including tantric sex, cannabis, yoga and pranayama. Apuleius Charlton in his recent post seemed to have a good understanding of the subject matter, and I won't attempt to top him here.

But I did want to offer a few notes on one of Wilson's observations. He seems to think that music can help activate the circuit. More specifically, he is interested in talking about the music of Beethoven.

Beethoven comes up quite a bit in this chapter. Beethoven is said by RAW to be "genetically inclined to right brain activities, that is, to sending coherent wholes, to plunging into neurosomatic bliss almost 'at will,' and to sensory-sensual raptness and rapture. Everybody 'knows' that the Sixth Symphony is 'pantheistic,' but whether Beethoven was an ideological pantheist or not, that way of responding to nature is normal and natural right-brain Circuit V functioning."

Wilson also writes that Beethoven could communicate his Circuit Five experiences, "which is precisely what the ordinary 'mystic' cannot do."

Wilson also writes about obtaining control of the neurosomatic circuit, a progression "from primate emotion to post-hominid tranquility," and says of this "Next Step" that "you can hear it in most of Beethoven's later, major compositions."

You will see that there is more about this in Chapter 12, including this paragraph:

" 'I am He that was, and is, and shall be,' a sentence from the Egyptian Book of the Dead, in hieroglyph and in his own handwriting, was found on the desk where Beethoven composed the Ninth Symphony and all his later, aeon-spanning 'evolutionary' music. One judges from this, and from the music itself, that Beethoven had opened the neurogenetic circuit."

However you judge such passages, certainly it is true that there are RAW fans such as Eric Wagner and myself who have a major Beethoven habit.

Anyone interested in this way of looking at Beethoven's music should read the short piece "Beethoven As Information" in The Illuminati Papers.  I almost hate to excerpt it -- RAW is on fire from beginning to end in this three-page piece -- but here is one bit:

" 'Anyone who understands my music will never be unhappy again'," Ludwig is alleged to have said. Some biographers doubt the source from which we get this; but it doesn't matter. If he didn't say it, he might as well have; the music certainly says it for him. It is the music of a stubborn individual who is willing to suffer anything, pay any price asked, to achieve greater organic vision than has existed in the world before him.

"To be blunt about it, what went on inside Beethoven's head was more important, in the long run, than everything going on outside that head in those years."

Terrific post. I had planned to listen to Mozart today, but I have Beethoven on instead, inspired by your post.

I got inspired to dig out my Beethoven cds and play the Sixth Symphony, it's on now. Listening for its pantheism, which I didn't realize. A passage in the 4th Movement reminded me of the intense tension in the Ukraine situation. Also read the Beethoven piece in The Illuminati Papers which begins with the statement that Lenin hated Beethoven.

I've been interested in the question of how mystics communicate for a long time. The statement that ordinary mystics can't communicate their experience as well as artists, seems likely. Mystics can and do communicate other things in other ways. Healers work through a process of communication. I noted that the Sixth Symphony designates Beethoven's Opus 68. 68 signals a certain kind of, you could say, pantheistic communication.

I'm always interested in what you all have to say about Beethoven, Mozart, Bach et al since my knowledge of classical music is incredibly shallow. I think you're piece really highlights one of the, assuredly, many vantage points that I couldn't comment on. Thanks Tom!

Listening to Beethoven's Ninth Symphony yesterday put me in mind of how things come into being, how new life gets created. Likely an effect of rereading Difference & Repetition by Deleuze which examines ontology and the process of morphogenesis, how things come into being. The quote that opens Prometheus Rising Chapter 11 by Sri Aurobindo addresses the same concerns - bringing something new into existence:"... are part of the physical transformation which ... evolution is called upon to realize." Below the quote we find the eye of Horus within a radiant triangle of manifestation, an occult image that easily does duty as a symbol of transformation and morphogenesis. The quote by Joyce on the next page addresses the same issue.

This passage from Difference & Repetition for me, helps model this transformation:

Intensity always refers to the inner. Going by Spookah's formulation of the post-terrestrial circuits = inner, terrestrial circuits = outer, then "intensive quantities" = how much you've got going on with the higher circuits. "Array Surrection," as Joyce puts it = the birth or formation of a new individual. The intensive quantities of the higher circuits bring about and determine the physical transformation of the lower circuits, in this model."[S]erial, stepped, and communicating" appears congruent with how Leary lays out the progression of the circuits and their stages in The Game of Life. Difference & Repetition first got published in France in 1968, the Eight Circuit model came a few years later.

Like Apuleius, Western classical music is an area where my knowledge is light to say the least. So I took the opportunity of going through chapter 11 to listen to Beethoven’s Sixth. I am now slowly listening to all sixteen of his quartets.

Just today I found by chance a second-hand copy of the Love And Rockets album I last week linked a song from. I appreciate this type of nice small synch, so I bought it. I had forgotten that it also features a song called ‘Yin And Yang (The Flower Pot Man)’. ‘Yin-yang’ appears in this chapter, on page 168. The band comes from Northampton, just like Alan Moore.

I noted another another instance of the expression “reality-island”, on page 173, when RAW talks of ashrams and communes. I find it interesting that this time he’s speaking of a “group reality-island” rather than an individual’s. This passage deals with neurosomatic brainwashing and being “trained to hook the bio-survival circuit onto the ‘guru’”. So the whole group becomes part of the same reality-island, which is one devised by a leader. Not quite Huxley’s utopian Island, nor the “self-government” of St Paul’s New Adam (p. 169). Tim Leary also alludes to this in the section on C5 of The Game of Life, by telling the reader to “chuckle at the devotees of Swamis and Gurus who enslaves their disciples with promises of self-liberation.”

About seeing the terrestrial circuits as outer, and the post-terrestrial as inner, Crowley makes a not too dissimilar remark regarding the eight limbs of yoga. He says the first four deals with physical training, and the remaining four deal with mental training and experiences. I would not necessarily attempt to correlate the limbs of yoga with the circuits of mind. Still, his essay is divided into eight lectures, which are actually presented as two times four.

Thank you very much for the tip, Apuleius! I was not aware of this at all.
But after some quick research I see that your picture is taken from the Bumper Book of Magic. It all makes sense now, ah!

The Moon and Serpent Grand Egyptian Theatre of Marvels:
https://www.youtube.com/playlist?list=PLILi1O6ASEClIgB4RuYuJxuX-RWeUepxJ