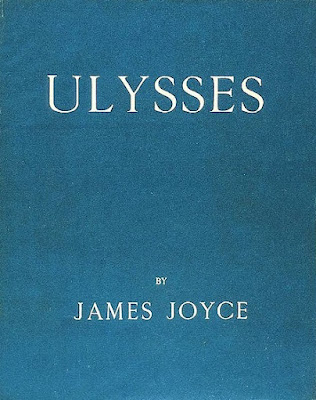 Cover of the first edition of James Joyce's Ulysses

Exercise 5: “James Joyce said he never met a boring human being. Try to explain this. Try to get into the Joycean head space where everybody is a separate reality-island full of mystery and surprise. In other words, learn to observe.”

I have spent a lot of time trying to get into the Joycean head space. I wrote my master’s thesis on the influence of Finnegans Wake on Masks of the Illuminati. When I interned with him, the poet B. H. Fairchild recommended the audiobook of Dubliners where a different Irish actor or writer read each story. I got that audiobook and listened to it over and over again in the car as I finished my master’s degree and at the same time finished writing An Insider’s Guide to Robert Anton Wilson. I also listened to a cassette of Joyce reading from Ulysses and Finnegans Wake which also included other voices reading Joyce’s two books of poetry, and a cassette of Irish songs that included a short version of “Finnegan’s Wake”. I continued listening to this set of Joycean metaprogramming tapes after I got my master’s degree as I continued working on my still unfinished book on Joyce and Wilson. (I plan to finish a rough draft in 2022.) I would mix in some Wilson tapes as well.

During my periods of Joyce obsession I have read Joyce’s books over and over again along with many books about Joyce. I had Finnegans Wake study groups from 1985 to 2021, and I watched a bunch of films about Joyce. I used to have a party on January 6 each year where we would watch the 1987 film The Dead. Joyce’s story “The Dead” takes place at a party for the Feast of the Epiphany around January 6, 1904. I took Bob Wilson to see that film in 1988. My last real period of Joyce obsession came in 2011 as I prepared to give a talk at the 22nd North American James Joyce Conference in 2011 on the question of whether Joyce included references to the Oz books in Finnegans Wake. I finished reading the Wake four times and Ulysses once that year. Of course, I think of Joyce a lot and read a bit of Joyce even when not in one of these obsessive Joyce periods. I did finish rereading Dubliners and two books on Joyce as I did this exercise over Christmas break 2021-2022. I also read a bit in Brenda Maddox’s Nora: A Biography of Nora Joyce. I have tried to read that biography since it came out in the 80's. I still have about 230 pages to go. At one point she refers to some of Joyce's letters to Nora as "even worse than Ulysses". Now, she meant their sexual explicitness, but I kept hearing the voices of many of my professors calling Ulysses the greatest novel ever written, so "even worse than Ulysses" could refer to every novel every written. Perhaps I should have "even worse than Ulysses" printed on the back of all of my books. On page 296 Maddox writes of Harriet Weaver’s generosity towards Joyce, “Miss Weaver’s largesse, some have argued, also impoverished world literature by allowing James Joyce to waste his lyrical gift on the bad joke of Finnegans Wake.” She does not provide any citation with the identity of these “some”. I know that Finnegans Wake frustrates many readers, including many of Joyce’s admirers such as Vladimir Nabokov.

I guess this Joyce obsession has helped me to observe. It seems like looking for quarters [meaning] everywhere, in every person and every situation. Bob Wilson told me he loved Edna O’Brien’s description of Ulysses as a day where nothing, and everything, happens. Certainly, everybody seems “a separate reality-island full of mystery and surprise”. February 2, 2022, marks the centennial of the first publication of Ulysses as well as Joyce’s 120th birthday. Small pockets of our culture will “Try to get into the Joycean head space” this year. Hopefully this will bear some positive fruit for our troubled world.

Great post! Thanks for mentioning the Nora biography. Someone told me of its existence without any details like who wrote it. Good to know about the author's bias. The same person told me about Hemingway's A Moveable Feast, a posthumously published anecdotal account of the circle of writers struggling to make it in Paris in the early XXth Century which included Joyce. Haven't read it yet.

I think it celebrates Joyce's 140th birthday this year.

Looking forward to reading your Joyce book, Eric. I recently, within the past year, read the new edition of An Insiders Guide to Robert Anton Wilson and highly recommend it to everyone.

Thanks, Oz. I plan to include my commentary on Prometheus Rising in my Joyce/Wilson book, so I plan to finish my rough draft around the time this study group finishes in September of this year. I have a little over 150 pages written in the book so far.

Eric, this was a truly Joycean post. I am deeply impressed- great writing! You'll have to let me take your Finnegans Wake class someday.

I think you did very well with the exercize.

Thank you for your kind words, Rarebit Fiend.

There's a Joyce story I've never forgotten from RAW's Coincidance.
It's the one where J.J. goes to his love rival's grave (Michael Bodkin) only to find that the grave next to it says: J. Joyce. And, as RAW says in his book, this happened in 1909, many years before Jung and Pauli formulated their definitions of synchronicity.
I wonder if there are other odd coincidences from Joyce's private life.
If there are, I hope you might discuss them in your book, Eric. I look forward to reading it.
I've always meant to re-read that remarkable chapter at the end of Coincidance - the one where RAW gets quite carried away discussing Joyce's code.

An other aspect of James Joyce which I particularly enjoy is his internationalism. This very much resonates with my views and personal experiences.
Ulysses was written between Trieste, Zurich and Paris, and features several languages (most prominently English, Italian, French and Latin). It seems that people cannot even agree on how many languages appear in Finnegans Wake. And many myths or legends from different cultures pop up in it.
Not to take anything away from any Irish person who might be proud of having Joyce as a national hero, but I would argue that he could rather be celebrated as an outernational hero of world literature. Hopefully, the Tale of the Tribe knows no borders.

Another culturally erudite, well-travelled, formally genre-hopping, and very humorous artist (who even similarly experimented with languages, as well as language itself), was Chilean film director Raul Ruiz, which I have prozelitized for in the past here. There are even clear traces of Orson Welles' influence in his work, so I think a RAW fan might want to check out his work.

I am still every now and then picking up and going through Deathsweat of the Cluster, and today I stumbled upon this passage from the chapter 'The ship of the sun is drawn 3':
"It is very likely that there was a lot more going on at Gertrude Stein's salon before and after World War One than lively conversation about art and literature. If the writing of James Joyce, Ezra Pound and even Hemingway at times appears to be at least partially inspired by psychedelics that is probably because it was."

I had never heard of this before, and find it an interesting idea, the psychedelics here suspected mostly being peyote and hashish (hash brownies, actually). Ulysses and FW definitely ranking high on the psychedelic scale, the idea of Joyce himself doing some makes sense to me.
So perhaps doing psychedelics also can sometimes be a way to get "into the Joycean head space"?

Through the YT algorithm I discovered that, last year, there has been an online VR Prometheus Rising reading group, hosted by something called VR Mystery School. There are videos for each chapters, here is the first one: https://www.youtube.com/watch?v=PJkIKzSnj_o

Going through these two chapters once again, something came to mind. There are two times four circuits, sometimes dubbed terrestrial and post-terrestrial. I tend to think of the first four as being concerned with how we relate to what appears as the outside world, or ‘without’. Then the last four deal with what seems physically or metaphorically internal to us, in a way ‘within’.
Now, back when RAW was sending us to go look for quarters, the first finding was to be thought of in terms of ‘selective attention’, ‘coincidence’, basically a materialist scientific view. The second coin was then believed to have been found because ‘mind controls everything’, a ‘mystical’ view.
Perhaps the first quarter symbolizes the first four circuits, since their effects can be observed and measured scientifically in the material world, and the second quarter represents the following four, as in a way they relate to mysticism and are about using our mind to control everything in us (including mind itself).
This idea seems reinforced by the quarter/four (circuits) linguistic connection.

Also, if what is within is without (which sounds a lot to me like as above, so below), then truly the 8C are not hierarchical but instead deeply intermingled. Regardless, if my intuition would turn out true, with the quarters posing as a microcosm to the circuits’ macrocosm, to me that would show how hologrammatic RAW’s prose is, with correspondences and resonances everywhere. PR here stands as a proud descendant of both Finnegans Wake and the Occult.