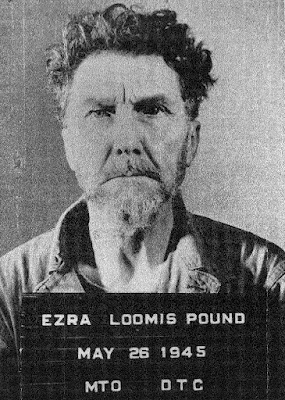 In the Hilaritas edition of Prometheus Rising it says:

The avant-garde 20% of the population, due to the Consciousness Movement (a secularization of much ancient shamanic wisdom), already understands every “wild” idea in the last few pages. They have had enough neurosomatic experience to know that they were once totally robotized (as most people still are) and are knowingly engaged in acquiring more neurosomatic know-how. When this reaches 51% of the population, a major historical revolution will have occurred, as profound as the Life Extension Revolution.*

* Please re-read this sentence, and think about it.

This passage becomes a strange loop, telling the reader to re-read “this sentence” over and over again, as well one should. Speaking of the Life Extension Revolution, I find interesting how many people in 2022 still consider death inevitable. Also, the phrase “neurosomatic know how” appeared earlier in Wilson’s “8 Basic Winner and Loser Scripts” from The Illuminati Papers: 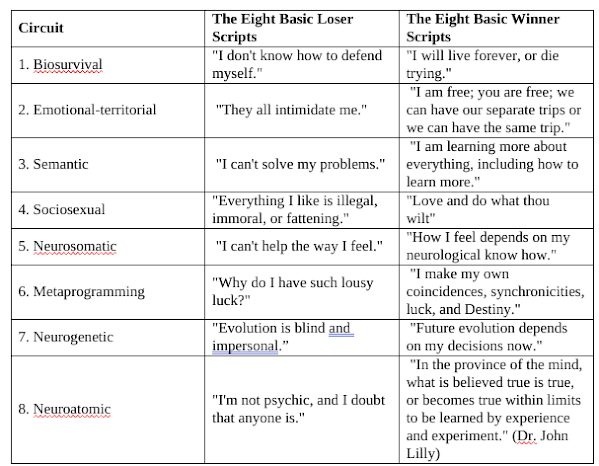 (For circuit 6, “Luck, synchronicities, and destiny” makes a more interesting acronym.)
A couple of paragraphs later Wilson says,
Everybody “knows” that the Sixth Symphony is “pantheistic,” but whether Beethoven was an ideological pantheist or not, that way of responding to nature is normal and natural right-brain Circuit V functioning. That is, anybody on the Fifth Circuit will “talk like a pantheist” whether or not he has developed a “philosophy” about pantheism.
(pg. 167)
I find it interesting that many people have accused Ibn ‘Arabi of pantheism. At the end of this chapter Wilson tells the reader to “Attend a Sufi week-end seminar.” I have taken a few online Ibn ‘Arabi classes, and last month I had a virtual “Sufi week-end seminar” which included an online Dhikr and an online Ibn ‘Arabi study group as well as reading some Ibn ‘Arabi on my own. Perhaps my whole life has become a virtual Sufi week-end seminar.
On page 171 Wilson quotes Scottish psychiatrist Ian Suttie, “The physician’s love heals the patient.” I have taught many children of doctors in high school classes. Some of them have suggested that money means happiness. Perhaps “The physician’s love of money heals the patient.” (No, Eric, that sounds bitter. I have met many physicians that I like and respect.)
On page 172 Wilson quotes Ezra Pound. I started read Pound because of Bob Wilson's writings. I bought ABC of Reading in either 1982 or 1983. I enjoyed the beginning of it, but I put it down when he started quoting Chaucer in Middle English which I didn’t understand. In the summer of 1983 I got Pound's Guide to Kulchur out of the library, and reading that made me fall in love with Pound's writing. I read him voraciously, becoming horrified by his fascism. I would stop reading him for a while, but then I would return to him, learn more and become horrified again, and stop reading him for a while. In the first few years of the current century I taught the whole Cantos three years in a row. Each time I said I would never do it again. I found it exhausting but very rewarding. I haven't read much of him since then, although I did use the anthology he edited, Confucius to Cummings, for about twelve college courses, and I used ABC of Reading for a creative writing class.
Wilson discusses marijuana in this chapter. I find it interesting that California legalized recreational pot in the same November 2016 election that saw the election of Donald Trump. I have not noticed much change in California since this legalization except for the presence of pot billboards along the freeways.

Great piece! I initially encountered Ezra Pound at RAW's online Tales of the Tribe course. After the course, I the read the entirety of The Cantos understanding a limited amount, but enjoying it thoroughly. I occasionally subjected my clients to recitations from parts I thought exceptional. I've only had a partial revelation of Pound's brilliance and look forward to exploring him further in years to come. A highlight in Allen Ginsburg's bio comes when he visits Pound in Italy and attempts to have a conversation with him.

Exercize 6 connects with one iteration of the Holy Guardian Angel. At one point when Frank Bennett had his retreat at Crowley's Abbey in Cefalu he had an epiphany and realization that the HGA = the subconscious or unconscious mind. He told this to Crowley, inspiring the Magus to write one of his more significant rituals, Liber Samekh, intended to invoke the HGA. On the Tree of Life, the operation for the Knowledge and Conversation of the HGA occurs in Tiphareth-6. We find the task of making the unconscious conscious in Gurdjieff's system as well as others. Both acquiring "neurological know how" and "knowing thyself" seems to come under the aegis of making the unconscious conscious.

He concludes the same exercize and the chapter by asking us to consider the idea: "Is this the 'One who is living you now?'" The last phrase recalls "Do what thou wilt."

As mentioned, an illustration of the Eye of Horus graces the entrance to this chapter, Chapter 11. I regard this version of Horus as pantheistic and Crowley's system as a pantheistic philosophy, others may disagree.

Describing Horus on death: "Thou, who didst avenge the Horror of Death; Thou the slayer of Typhon! Thou who didst lift thine arms and the Dragons of Death were as dust ..." - from the Invocation of Horus according to the Divine Vision of W., the Seer, Magick (1st edition) p. 413.

Model agnosticism implies utilizing multiple models. I find that using models that cover similar ground in a different way can bring insight and confirmation. In Joe Hughes' guidebook he writes: " Difference and Repetition ... is the story of the progressive development of consciousness." It seems to me that Prometheus Rising also tells the story, in a different way of the progressive development of consciousness.

In the same guidebook, Hughes quotes another French philosopher, Pierre Klossowski. Compare what he says to what Wilson writes in exercize 6: "'For the longest time,' Klossowski writes, 'conscious thought was considered thought itself. Only now does the truth dawn on us that by far the greatest part of our spirit's activity remains unconscious and unfelt.' This unconscious and unfelt part of our spirit, the secret subject, is what he repeatedly calls the 'essential aspect of ourselves. It is 'our pathos'. It is our body and its drives, 'the ensemble of our impulsive life'. Like Deleuze's secret subject, these drives constitute consciousness: 'The act of knowing, judging, or concluding is nothing but the result of a certain behavior of the impulses toward each other ... a precarious armistice between obscure forces."

The excellent YT channel letstalkreligion has many videos on Sufism, which can make for a great introduction to the subject. In this long one on Ibn’Arabi for example, the question of his pantheism is dealt with:
https://www.youtube.com/watch?v=-bgWnzjONXE
Here we get a bit of beautiful Sufi poetry, along with very nice visuals:
https://www.youtube.com/watch?v=t-Se3ODf_08&t=201s
And in a way that feels perhaps relevant to this chapter 11, this video talks about ‘mystical Love and Sufi women’:
https://www.youtube.com/watch?v=cVSZaxcg6RY&t=929s
There are many others, that I am still exploring, dealing with topics such as ‘the unity of being’, an ongoing series on Occultism within the Islamicate world, and even a video exploring the connections between coffee and Sufi mysticism. That one gave more depth to the Javacrucian ritual I observe daily, thanking Eris for the tasty brown brew that smoothes out the transition from bed to armchair, before further journeying through the material world.

About links between the chapter on C1 and our current chapter 11, back then RAW was introducing in the exercizes the Tantric “breath of fire”, which I identify as Tummo (and seems to have inspired what is now branded as the Wim Hof method). He also wrote that “all schools of yoga -Buddhist, Hindu or Sufi- place such emphasis on restoring natural breathing before trying to move the student on to higher circuits and wider consciousness.” (p.37) Thus foreshadowing what he is now developing more fully.

In relation to this chapter, RAW in the 8 Circuits of Mind MLA course wrote:
“DO the exercizes especially the Christian Science texts for the month. You can now find them online
www.cssentinel.com
If they seem like gibberish, that’s okay; just do more pranayama and/or smoke more pot, until you can decipher them.”

I decided to follow A Course In Miracles at least for a month, as prescribed in exercize 1, but perhaps for the entire 365 days, if I feel compelled to keep on going. Christian Science and ACIM are mentioned by RAW in the great ‘Adventures in the HEAD revolution’ article:

“In 1977 I began experiencing angina pectoris. A medical examination revealed no physical problems with heart or lungs, and no explanation. At a friend’s suggestion, I went to a Christian Science practitioner, who talked a good deal of what seemed like nonsense to me. A half hour after leaving his office, my angina went away. It has never returned.
I went back to the CS practitioner a few times, to discuss how that system works. Then I began reading Christian Science literature, and it also sounded like nonsense. Many years later, I read A Course In Miracles and that also seemed like nonsense to me, but I have observed that, like Christian Science, it “works” a lot of the time, for those who give it a try.”
http://rawilsonfans.de/en/adventures-in-the-head-revolution/

Oz Fritz, my view of model agnosticism seems similar to yours. I also note that after holding together perspectives that at first seem contradictory, after a while and without having necessarily resolved said contradictions, what sets them apart sort of loses its relevance. There might be a bit of ‘union of opposites’ in what I am trying to say, but this feels like over-simplification. Anyway it sort of makes sense to me.

RAW also wrote of this chapter in the MLA: “Note that Mrs Eddy entangles the meta-model with the milton-model. Attempt disentanglement.”

I like the "Let's Talk Religion" videos. He gives a nice academic perspective. I liked the Ibn 'Arabi talk. I also love Stephen Hirtenstein's videos on Youtube.