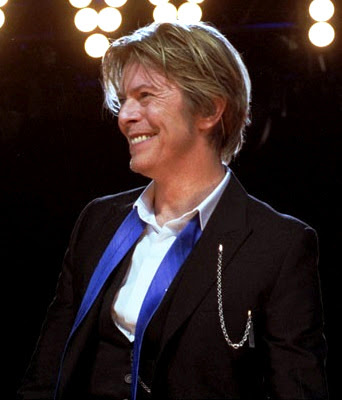 People have wondered for awhile whether David Bowie, the talented and fascinating British rock star, might have been interested in Robert Anton Wilson.  Here are a few sentences from Oz Fritz, who wrote about Bowie in 2016 after the sudden news arrived of Bowie's death from cancer. (In spite of his stardom, Bowie has managed to keep the news of his illness private, so the news was a terrible shock. But despite having no warning, Oz wrote a very substantial article, as you can see.)

Bowie also appeared completely dialed in to the space migration, extra-terrestrial intelligence, Starseed Transmissions gestalt that RAW and Leary were promoting in the '70s ..... [Much more at the link.]

I have thought about Bowie again this week, after running across "Hunky Dory Turns 50," about the album sometimes seen as one where Bowie found his stride.

Hunky Dory is the album that includes "Changes." When I looked up the album on Wikipedia, I discovered that it has a song, "Oh! You Pretty Things" that "reference the teachings of the occultist Aleister Crowley and his Golden Dawn and the philosopher Friedrich Nietzsche, particularly with the lines 'the homo superior', 'the golden ones' and 'homo sapiens have outgrown their use'."

The Hunky Dory article also mentioned something else that's interesting: 1971 apparently is considered a year that provided the peak of classic rock:

"The classic rock era arguably launched in 1971, seeing the release of a multitude of iconic LPs. Specifically, these foundational and ground-breaking albums ranged from the Rolling Stones’ Sticky Fingers to Funkadelic’s Maggot Brain; and from Joni Mitchell’s Blue to Marvin Gaye’s What’s Going On; and from Carole King’s Tapestry to Led Zeppelin IV. As the year ended—on 17 December—a 24-year-old British singer-songwriter David Bowie released Hunky Dory, a record whose musical versatility and genius rivals any of the Beatles’ late ’60s catalog."

There's a book about this, Never A Dull Moment: 1971 The Year That Rock Exploded by David Hepworth.

I am not a David Bowie expert but I have an old friend, Gary Shindler, who actually is, and so I asked Gary if he could help me by giving me his list of the top five Bowie albums. Gary kindly obliged, so exclusively for this blog, here is Gary's list:

"His catalog is vast and simplifying it to five albums isn't easy," notes Gary, a fan of the Hunky Dory album.

'Oh! you pretty things' and that Crowley reference have been on my mind sense September last year and I too was curious if he had an interest in RAW. What a coincidence.

Tim Leary loved Bowie and called "Changes" his favorite song of the seventies. He expressed disappointment in 1983 that Bowie didn't include that song on his Serious Moonlight Tour that year.

Thanks Tom for linking to my Bowie blog.

I'm not a Bowie expert either. The one bio I read about him appeared very condescending and placed more emphasis on his sexual and drug adventures than his music.

Of the top 5 listed, I have to explore Man Who Sold the World and Aladdin Sane. Station to Station references Qabalah directly, the different stations indicating the Sephiroth.

My Bowie favorites not on the list include Stage - double live album, Heroes, The Rise and Fall of Ziggy Stardust and the Spiders from Mars, Hunky Dory, Lodger and Let's Dance. I also enjoy Pin Ups his album of covers, though some music critics consider it one of his weaker albums. Honorable mention to Black Star which I like musically, but has a bit of a cold sound to the production.

@Eric, that's a wonderful anecdote. In general, Leary seems to have paid better attention to rock music than RAW. I think Leary also liked the Beatles, the Rolling Stones and Roxy Music.

@Oz, I do need to explore more Bowie and I'll refer to your list. I have been known as kind of a music nerd, but Gary exceeds me and really is a Bowie expert, so I think his list carries a lot of weight.

@Andrew, I have the sense that a lot of RAW fans respect Bowie. I know Cat Vincent wrote about Bowie on Twitter after Bowie died.