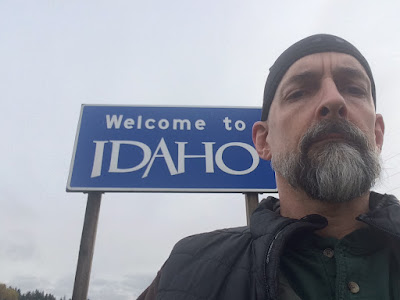 As I never got close enough to Neal Stephenson Monday night to take a good photo with my cell phone, here is an official photo from his website.

Neal Stephenson is busy doing a press tour to promote his latest book, Termination Shock, a new novel about global warming. He actually came to Cleveland this time and I saw him last night at a library in Parma.

Also Monday, The Week magazine published his list of six books about information manipulation. And you can also read a longer version of the list, which has 11 titles. I plan to read at least one of the books; I'll also read his new novel soon.

Via those lists, I learned a new word: fallibilism. Stephenson defines it as "the disarmingly simple idea that none of us can ever be sure that our beliefs are correct, which is why we need a process for agreeing on what's true." Wikipedia defines it as "the philosophical claim that no belief can have justification which guarantees the truth of the belief, or that no beliefs are certain."

In a sense this is a restatement of Robert Anton Wilson's claim that few things in life are certain; it's best to talk about probabilities.

Stephenson's main concern appears to be that people get locked in to false beliefs and then refuse to give them up; he expressed surprised Monday night that so many people don't seem to consider COVID-19 real and he also wants global warming to be accepted as a reality that must be dealt with. Hence his concern for "agreeing on a process for what's true."

The concern with being able to change your views and admit you are wrong would also seem to fit with RAW's "Cosmic Schmuck" exercise, i.e. you become a little less of an idiot if you admit you might be wrong and are willing to revise your views.

I saw Stephenson, one of my favorite authors, in Pittsburgh in 2019; here is my blog post about it.