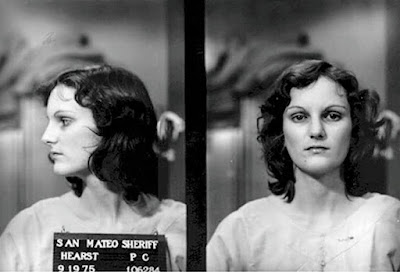 When I read Chapter 9, these two paragraphs seemed particularly vivid and interesting to me:

"When Patty-Tania [i.e, Patty Hearst] was captured and brought to trial, the defense claimed that she had been 'brainwashed.' The jury either did not understand or did not believe this; they sentenced Patty to prison for the crimes Tania had committed. Debate about this case continues to the present, since some people think Ms. Hearst was 'responsible' for the consciousness change she underwent while held captive by the SLA and others are just as sure she was not 'responsible.'

"Leaving metaphysical questions of 'responsibility' aside for a moment, it seems obvious that a young lady of Hearst's class and background would almost certainly not have taken up bank robbing if she had not first been kidnapped and incorporated by the SLA."

It certainly seems obvious to me that Hearst totally was a victim in this case and that a tremendous injustice occurred when she was sent to prison. Yet, as Wilson points out, that did not seem obvious to the jury, even thought it was completely clear even at the time that she had been violently kidnapped and terrorized by a depraved left-wing gang of murderers and kidnappers. I remember at the time, Patty Hearst had very little sympathy from the public; she was seen as a spoiled rich kid trying to avoid responsibility for her crimes. This now seems like an incredibly ignorant opinion.

Check out the Wikipedia article on Patty Hearst, which has details which seem shocking to me. Consider for example that she was sentenced to 35 years in prison for bank robbery. Contrast that to the lighter sentences given to the actual criminals in the SLA gang who victimized Hearst, such as Emily Harris, who got only eight years for murdering a woman during a bank robbery. Harris was the triggerwoman who actually committed the murder.

The exercises for the chapter seem a bit dated, as they concern such things as the John Birch Society and nudism. If you are a committed Democrat, why not use social media to enter the minds of Trump fans? And as someone who obtained a vaccination against COVID-19 as soon as I could, I've certainly had interesting conversations with anti-vaxxers. I recently talked to a health official who described how a nurse at his organization had resigned rather than agree to follow a mandate to be vaccinated. The woman had recently buried her husband after he died from COVID-19, the official told me. Now, that's a woman who lives in a reality tunnel different from the one I'm in.

Terrific post. I enjoyed Leary and Wilson's article on Patty Hearst in "Neuro-politique". I also enjoyed the film "Patty Hearst".

They have had screenings of "Citizen Kane" at Hearst Castle. I would like to attend one of those.

Exercize 2 asks to analyze the Jim Jones/Illuminatus synch as "mere coincidence". Doing so means rejecting the idea that it is a synchronicity and just shrugging it off. It might or might not be the right thing to do here, but in my mind this translates as a refusal to consider the superposition of these two events as being worth analyzing.
In my view, one of the issues with scientific materialism is a tendency to reject things that do no easily fit pre-established reading grids.

On the other hand, looking at it from the opposite exercize 3 perspective, I have no idea what "the message" could be. The history of Discordianism seems full of very weird coincidences, some of which looking a tad too much to fit the pattern-seeking habit of the human brain. Then again, how can we make sure? Well, only rationalists or materialists want to make sure, I am totally fine never knowing 'for good'. On this regard, Znore's book Death Sweat of the Cluster, which I am slowly going through, is a fascinating read. Thank you Tom Jackson for hyping it up when it came out, I am very glad I got myself a copy!

That being said, there seems to be a link between synchronicities and the search for meaning. But what with holding multiple perspectives at once and going further down the rabbit hole, as Terrence McKenna would say "the danger is madness" (especially if mixed with psychedelics, perhaps).

I just received a copy of Tim leary's The Game of Life, as recommended by RAW in the previous chapter. I have never read it, and my edition is the recent one featuring the Bobby Campbell cover art.
I was wondering if someone has read Gregory Bateson's Mind and Nature, and what they thought of it?

I suspect Patty Hearst received such a harsh sentence because she got perceived as representative of kids rebelling against their respectable backgrounds and families even though she didn't voluntarily rebel.

The graphic on p. 139 illustrating multiple views and the two paragraphs just below it seem like an important. He writes:"When your whole world, and not just a design on a book- page is transformed this way ..." Reading James Joyce helped do this for me.

p. 137: "Human society as a whole is a vast brainwashing machine whose semantic rules and sex roles create a social robot." Joyce confronts this issue in the latter part of A Portrait of the Artist as a Young Man. Said book seems excellent adjacent reading to this chapter on C4.

I have not read Bateson's book. The Game of Life became extremely important at the time I read it in my early 20's. I recall getting that one before Prometheus Rising. I derived the name of my sound engineering company from the former. Reading up on stage 14, "hedonic engineering" introduced me to the idea and the reality that good nutrition and dietary supplements could make one feel a whole lot better - a revelation (and elevation) for me.

I've started the Bateson book, but I have never finished it. I have a copy in the garage somewhere, I think. So much time, so many books.