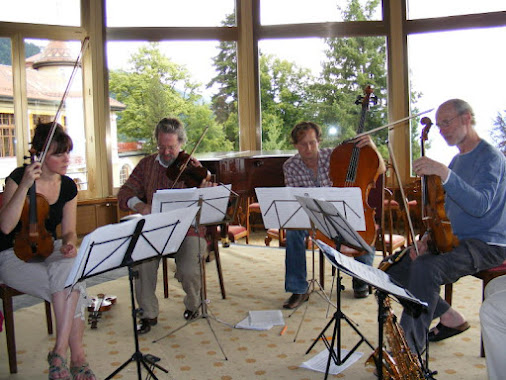 The Fitzwilliam Quartet rehearsing in 2008 in Switzerland. (Creative Commons photo by Surreybirder).

On page 125 Wilson writes, “A mass made of people who have intense curiosity about why Beethoven went in for string quartets after the Ninth Symphony . . . is not a mass that will be easily led into dull, dehumanizing labor at traditional jobs.” I asked on Facebook, “Why do you think Beethoven focused on string quartets after the Ninth Symphony?” Novelist Rafi Zabor answered, “Turn it down! It's so loud can't hear a fuchen thing! Okay, a bit more seriously: at least since the Razumovskys and probably before, he had brought his most uncompromising summings-up and steps-ahead before the demanding bar of the quartet form, its inherent possibilities and limitations. And there he was, either at an end or a new beginning, or both. So he wrote quartets. Sounds like a good answer, and though it likely won't last it's good enough for now.” He added, “Compare/contrast, say, with the primary inwardness of the last three piano sonatas, which must have been a relief to compose during the monstrous work of getting the Missa and the Ninth done.”

Composer Robert Rabinowitz responded, “Rafi Zabor I was thinking that as well. For my own compositions I find it particularly daunting to tackle more than about 8 instruments. Sometimes it’s just the massive amount of notes on a single page that can just become stressful to look at. Even though the reality is there is a lot of section playing going on so, of course, it isn't as if there are 70 or more instruments playing different lines. Hmmm - wonder if that's been done, I may have to do it.”

At Rawillumination.net, Tom Jackson asked, “Is it just a coincidence that the Beethoven-obsessed Wilson brings up string quartets in a chapter about the four circuits? And if not, what instruments relate to which circuit? I would say the cello is Circuit One, viola Circuit Two and the two violins circuits Three and Four.” The cello seems very erotic to me, so I would associate it with the fourth circuit. At first I thought to assign the two violins to the first two circuits. The top dog – bottom dog dynamic works well for the second circuit, but I don’t think the viola fits in well with the third circuit. The viola seems the least egotistical part of the string quartet. It rarely gets the solo voice or the strong bass line of the cello. (“It’s all about the bass.”) When following a score for a string quartet, I find it easiest to follow the first violin part or the cello part. I have to strain to follow the viola part which tends to play a largely supportive role in Beethoven’s quartets. I would associate the viola with the first circuit and the violins with circuits two and three. The verbal chatter of the third circuit fits in well with the first violin, and the second violin fits in well with the second circuit. I find it interesting that a string quartet has four members, and most of Beethoven's quartets had four movements. Four times four equals sixteen, the Tower in the Tarot, and Beethoven wrote 16 string quartets. The Tarot has sixteen court cards as well. Sixteen flowerpots play a pivotal role in P. G. Wodehouse’s Leave It to Psmith, one of my favorite books.

Amazon informed me that they cannot fulfill my order for The Skeptical Inquirer and refunded my money. I do find myself enjoying reading The New York Review of Books. The October 7, 2021, issue includes a review of a biography of Portuguese writer Fernando Pessoa. The review says Aleister Crowley “had plans to tap Pessoa to lead a Lisbon brand of his Ordo Templi Orientis” (pg. 19). Bob Wilson wrote that some intrepid soul sent out cards making over 1000 people outer heads of the O.T.O. As an Outer Head of the O.T.O. myself, I declare all of you reading this outer heads of the O.T.O. as well.

Thank you for your generosity, Eric Wagner, I had never been an outer head before. Is that the lumpy in front and usually hairy in the back non-verbal event one, or the one that does the thinking?

I actually bought a copy of Pessoa's Book of Disquiet very recently. Given the structure (or lack thereof) of this non-book, I think I'll have it sitting on my table and will just pick it up at random every now and then in the future. Looking forward to that.

"Pessoa was a prolific writer, and not only under his own name, for he created approximately seventy-five others, of which three stand out, Alberto Caeiro, Álvaro de Campos and Ricardo Reis. He did not call them pseudonyms because he felt that they did not capture their true independent intellectual life and instead called them heteronyms. These imaginary figures sometimes held unpopular or extreme views." (Wikipedia)

In effect, it could be said that Pessoa was creating for himself a new reality tunnel with every heteronym. No wonder he was interested in the occult.
I do find it amusing that someone who many suspect died a virgin could have been considered as head of a sex magic cult.
I encourage everyone not familiar with him to go look up Pessoa.

Eric, your reasoning for how you assign which instrument of the string quarter to which circuit seems reasonable to me, but why do cellos seem"erotic" to you?

Tom, the cello has a womanly shape.

I wrote and sent this very early yesterday before seeing any other comments but for some reason it didn't get through so sending it again.

Oh ho! I, for one, feel beyond honored to get appointed an O.T.O. O.H.O. Coincidentally, my current reading, The CULT of Aleister Crowley by J. Edward Cornelius touches upon the subject, parodied here, of the rightful O.H.O. I came across mention of that subject yesterday shortly after reading this blog.

Outstanding writing about music in the OP. I haven't the slightest idea why Beethoven switched to string quartets after composing the 9th. The Missa Solemnis appears next in line for my Beethoven education.

The reasoning behind my string quartet attributions has to do with how I mix them. I always start with the lowest register/pitched instrument, the bass and work my way up to the first violin. The quartet has to sound balanced across the audio spectrum from top to bottom. I imagine the Neurocircuits rising in abilities as the nervous system develops. Therefore I correspond the bass with C1. I include the autonomic nervous system as part of C1 which seems the base of the body; it always goes, keeping the body alive no matter what the other circuits do. The two violins, when isolated, recall the head brain chatter, the inner dialogue, of C3. I agree on the erotic aspect of the bass and feel that contributes to the sexual component of C4 which I correspond with the entire quartet.

I ordered The Skeptical Inquirer directly from their website and have received one issue, so far. Anyway, I don't think anyone misses anything of any importance anyhow by not seeing it.

I erred in my last post; thinking about the bass part of the string quartet which, of course, comes from the cello. I have a bias toward sound so wrote from that perspective rather than the actual instrument. The double, or uprite bass instrument sometimes accompanies string quartets in modern recordings, but not as a member of the quartet itself. Sorry for the confusion.

So, the cello for C1 because it's the lowest circuit.