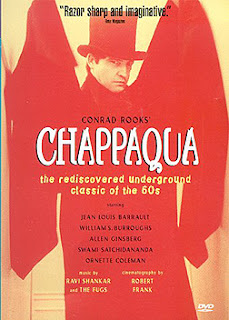 The tireless Martin Wagner announces another find:  A movie review by Robert Anton Wilson of Chappaqua. (Although technically the review from May 1967 of the East Village Other is listed as by “Kevin O’Flaherty McCool" and it is subtitled as a "A Non-Review of a Non-Movie.")

William Burroughs appears in the movie, and Wilson asserts, "CHAPPAQUA, the first film to use Burroughs‘ cut-up technique, proves that technique is even better adapted to cinema than it is to the printed page."

Wilson also writes, "William S. Burroughs is not only a great writer but also a great actor — His performance as Opium Jones, the spirit of addiction, is the creepiest characterization since the late great Bela appeared as the Transylvanian Count."

There are big chunks of cut-up prose in the piece. Martin includes a YouTube video of the movie, so that you can see it for yourself.