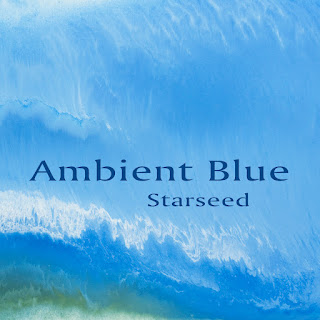 Ambient Blue is the new album by Starseed, the California based band featuring Rasa on sitar and guitar, Bastian on synthesizer and Marlis Jermutus on tambouris. This new release has Rasa on guitar and Bastian on synthesizer, with the cover painting a detail of Marlis' painting Gravity #27.  Available at Bandcamp; I bought it and sat up late last night listening to it on my new Bluetooth speaker, which really brought out the sounds. (You can do downloads in various formats, including FLAC which are high fidelity but will take up a bit of space.)

A couple of questions for Rasa:

How long has it been since your last release?

Our last release was in 2014… Prana, I’ve been busy since then. [Running Hilaritas Press and the Robert Anton Wilson Trust, etc. -- The Mgt.]

I see you added guitar and synthesizer, tell me about your "new artistic direction." Is it more like a German synthesizer band?

Right after Prana was released, I moved to California, and a year later Christina and I started Hilaritas Press. We’ve been playing music, but I’ve been putting most of my time and energy into publishing. I have been picking up the guitar often during the day to try to teach myself to play the blues in the last years. I think it’s that blues infusion that permeates the first four tracks of the new album, and gives the album its name.. The last two tracks are about as abstract as we are likely to get, and they may suggest something that might come out of Germany, as you suggested. That makes sense as Bastian is from Berlin and began programming and playing synthesizers back when groups like Kraftwerk, Tangerine Dream and King Crimson were major influences for him. Bastian branched off into esoteric studies of the musical arts, and even got a certificate years ago in Sound Healing from the Globe Institute in San Francisco. I’m not really sure what to call his style of playing, except for maybe “soundscapes.” He has a great sensitivity for creating lush audio environments. I really love playing around in those spaces he creates.

Our recent deer videos mostly feature music that came to be the new album. It was largely the warm response the music got on Youtube that pushed us to assemble this album. Hope you enjoy it.