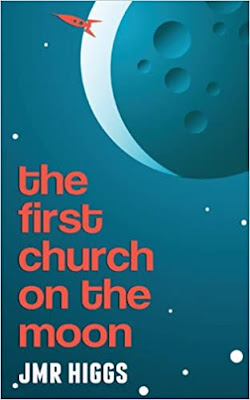 Before he embarked on his current hot streak of writing acclaimed nonfiction books, John Higgs wrote two not terribly long novels which I liked very much,  The Brandy of the Damned and The First  Church on the Moon.

The latter book has a charming "agnostic bishop" named Jennifer Hammerpot, and there's one particularly wonderful bit in which the bishop pulls out her bible, and reads a passage of scripture suggesting that people are best off if they have three religions -- zero or just one religion isn't enough but anyone having a dozen religions is "confused or bamboozled." Maybe I can get away with a brief quotation without committing a copyright violation, although a brief quotation leaves out some pretty good lines you'll have to get yourself a copy.

"4. The most practical and useful approach is to have three religions.

"5.  I mean, roughly three. It's not an exact science. But between two and five, something like that.

"6. Three is good though. You can position yourself in the centre of three religions and in doing so drink of their wisdom without falling for their bullshit.

In one sense, this passage seems like a restatement of what Robert Anton Wilson had to stay about reality tunnels, although it offers a unique perspective and perhaps some useful life advice.

And I recently wondered if perhaps I've taken John's advice, at least in a way and maybe not on purpose. What would my three religions seem to consist of?

I was brought up at a Unitarian. I got confirmed in the denomination as a teenager. I haven't really kept up and my church attendance consists of very occasionally attending my parents' or my sister's Unitarian church as their guest.

I got really interested in Buddhism while still a teenager and I've read quite a few books on the subject. I once attended an Insight Meditation Buddhist retreat that lasted for several days. I have not maintained a consistent meditation practice but I still know a fair amount about Buddhism.

And more lately I have become really interested in Epicureanism. I have recently finished reading three books on the subject and have put a fourth on hold at the library.

(I would not consider myself a Discordian, although I am obviously very interested in the ideas of Robert Anton Wilson.)

So, how many do you have?

Update: The passage also is in John's novel The Brandy of the Damned. See the comments.

Jew (more a cultural and ethnic feeling, and I am definitely a lapsed *Reform* Jew), Sufi Muslim (because Idries Shah had either a superior form of Wisdom or a superior form of fraud), Vedanta Hindu (because it seems more and more reasonable that all people and many other things are God’s cosplay; thou art God)

I think that passage is from Brandy of the Damned. Not sure, but if it is in First Church of the Moon, that means John used the passage in both books.

It is definitely in "First Church on the Moon." I don't know about "Brandy of the Damned," I can look for it tonight.

On Twitter, when John Higgs was asked if he used the passage in both books, he answered, "It's possible. I think a couple were reused to get across the idea that these were the same blue bottle bible pages, and the rest were new. I've no memory of which I reused, though!"

Well, I've just checked an ebook version of "Brandy of the Damned," and I can confirm the passage is in both books.

Well, I just really like John's writing. I wonder if Model Agnosticism is a literary genre.

I am partially a (gentle, middle-class, church-choir and Noah's-Ark-and-Let-the-children-come-to-me based) Christian who committed apostasy because I couldn't accept the harsher parts of that religion. I am authentically a Hellenic devotee of the Olympians as those are the gods that I grew up reading about obsessively and desperately wishing they were real/making them my imaginary friends and eventually realizing them in a way I didn't think was possible. I am naturally a theistic-agnostic and fideist, which I view as the purest form of agnosticism. I do not think humanity is that smart, nor do I think we know what is "really" going on anymore than people knew what was "really" going on at any other point in time. A large part of me fears that the "theistic" part of the equation holds a belief in a very-much-larger GOD that is impartial or even unaware of such a tiny facet as mankind. A larger part of me assures me that we are all part of the thing that I refer to as god and that in the end, it will all come together. A pure part of me is based entirely around the idea of apocatastasis.

I am a Blakean(?), insofar as I believe that Blake was inspired by the poetic genius and I have been possessed by Los.

I am a Crowleyean (he would hate that term), insofar as I accept the Law as I understand it and will do my best to see it actualized.

I am a Model Agnostic and Magician sometimes, insofar as my kindest and best teacher was Robert Anton Wilson.

I am an adherent of the Moon and Serpent Grand Egyptian Theater of Magic, although they don't want any other members, insofar as the Messrs. Moore & Moore have indelibly changed and continue to change me.

I have dabbled in Shakti Hinduism, Kabbalah, and Voudun. I have never met a religion I wasn't at least a little bit in love with.

I believe in magic.