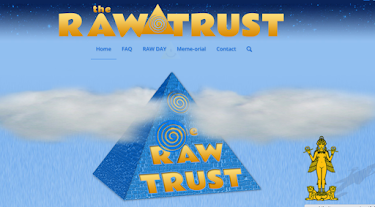 Rasa and the Hilaritas Press folks are hard at work on Starseed Signals: Link Between Worlds by Robert Anton Wilson, the "lost" RAW book from the 1970s. I believe it will be out soon, but I have no inside information on what "soon" means. It could be 15 minutes after I post this, it could be another couple of weeks.

I do know that Rasa has been working hard on the book, calling in extra copy editing, doing careful fact checking (he asked physicist Nick Herbert for help on a section that discusses interstellar travel at very near the speed of light), fussing over the cover to make sure it is right. Rasa wants to get the book out, but he wants to make sure it is the best possible book.

I suspect the reason for this is that Starseed represents a real opportunity, for the Robert Anton Wilson Trust and its publishing imprint, Hilaritas Press. By definition, Starseed is not a book that most RAW fans already own. We'll all have to buy it, so there might be some actual decent sales for Hilaritas.

Starseed is also news. A cult author, whose work has been kept alive by an informal, unusual  network of literary activists, is being revived by the publication of an unexpected new book, even as efforts are being made to turn his best-known work into a TV series.

So this is where RAW fans come in. It would be nice for the publication of the book got enough attention that readers outside of the usual RAW community got a chance to hear about Robert Anton Wilson, his new book, and his work.

If you have a social media account, or a blog, or a website, or if you know someone who writes about the literary world for a newspaper or a magazine, or if you know somebody who works at NPR, or if you can do something else I haven't mentioned here (suggestions welcome), please help publicize Starseed when it is released. Please help get the word out.

That‘s a very good and important suggestion, thank you.
I do not have a very large range, but i‘m in!
D.M.S.